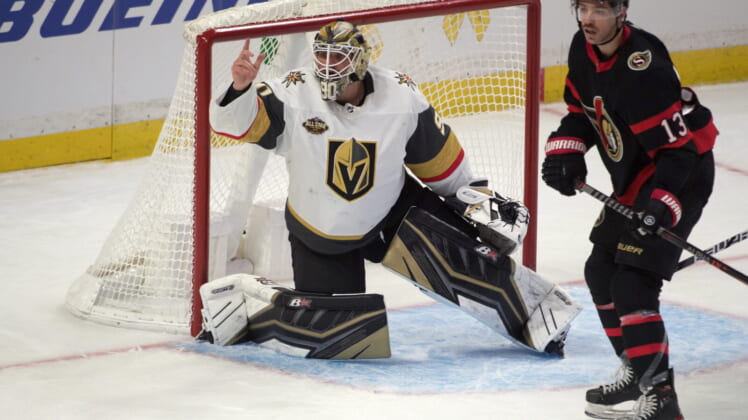 The Vegas Golden Knights bounced back in a big way with a 5-1 victory over the Ottawa Senators on Thursday night in Ottawa. It was a huge response for a team that got shut out last game against the TorontoMaple Leafs. The explosion of goals was well overdue and a huge relief for the Golden Knights who have been puttering offensively during this early part of the season.

With the news of the blockbuster trade for Jack Eichel taking the dominant storyline for the Golden Knights tonight, it was an impressive display of effort and a representation of how good this team can be despite missing many of their best players. While the Senators aren’t among the best teams in the league, they still have a group of young and feisty players that will make every night a challenge.

“I think this was exactly what we needed,” commented coach Peter DeBoer after the game. “We weren’t happy with our performance [last game].”

This win brought the Golden Knights back to a .500 record. Staying around that mark while they have so many injuries will be crucial to make sure that they aren’t facing an uphill battle to make the playoffs when they do have a full roster at their disposal.

The floodgates open for Golden Knights

The Golden Knights have been struggling to create an identity while attacking with their current lineup. Those issues were best represented last game against the Toronto Maple Leafs when they were shut out for the second time this season and couldn’t muster much in terms of chances.

Tonight they managed to score five goals and they got scoring from many different places in the lineup. It started with William Carrier who scored his second of the season after a weak shot found the back of the net through Senators goalie Filip Gustavsson’s five-hole.

It was an encouraging offensive outburst for a team that has desperately needed one and hopefully a sign of things to come. The Golden Knights have been on the wrong side of the puck luck in a few games this season and tonight that trend was reversed.

Alex Pietrangelo has been at the center of many debates this season as his analytics have been dreadful while those who watch carefully have been supporting him. No matter your stance on this discussion, tonight was a signature performance from the defender who was spectacular from start to finish.

He scored his first goal of the season on a shot from the point near the end of the third period. Besides his goal, he also led all Golden Knights skates with a CF% of 70% at 5-on-5. Safe to say that both those who value the eye test, as well as the analytics, will be happy with his game tonight.

The Golden Knights completely dominated play while he was on the ice to the tone of scoring three goals and only conceding one at 5-on-5 while he was playing. In a game that was very fast-paced, he provided a steady presence and deserves to be recognized for his play.

DeBoer decided to roll with a few new lines tonight. One of those changes was moving Carrier to the second line to play alongside Chandler Stephenson and Evgenii Dadonov. While Carrier has traditionally been used as a bottom-six energy player, he thrived in this role and was one of the most dangerous skaters on the ice.

Another line that thrived was the trio of Jonathan Marchessault, Nicolas Roy, and Reilly Smith. The Golden Knights scored two goals while conceding none at 5-on-5 while these players were on the ice. It was a big performance for DeBoer’s new combinations which gives the coach more possibilities heading into the future. When DeBoer was asked about Roy’s performance after the game, he had many positive things to say.

“I thought he did a great job. It’s a big ask.”, said DeBoer, “He deserves that opportunity and he played really well.”

The Golden Knights play their next game on Saturday against the Montreal Canadiens. The puck will drop for that game at 4 PM Pacific Time.