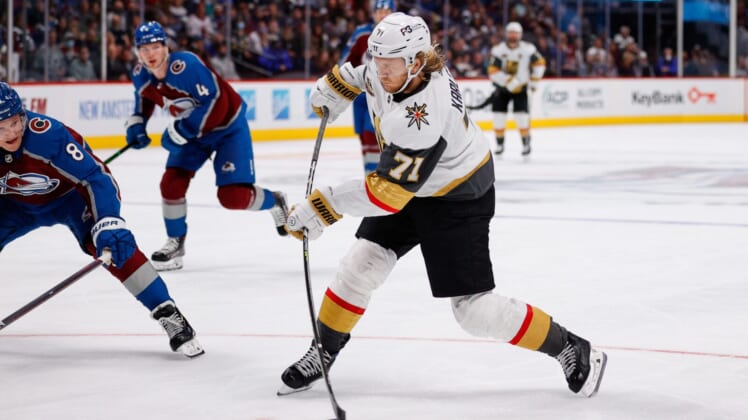 The Vegas Golden Knights managed to grab their second win of the season as they beat the Colorado Avalanche, 3-1, on Tuesday night. It was a big road win for a Golden Knights team that desperately needed one. While the Golden Knights didn’t play a perfect game, they did enough to get the two points and there’s no bonus for style points in the standings.

The three-goal scorers for the Golden Knights were Chandler Stephenson, William Karlsson and Keegan Kolesar. Robin Lehner had another great game. His strong play this season has been overshadowed at times by the offensive struggles that Vegas have had, but performances like Tuesday’s show why the team was comfortable getting rid of Marc-Andre Fleury this summer.

The Golden Knights needed a win badly as they’ve been free-falling down the standings after grabbing zero points in their last four games. This win against the Colorado Avalanche, the team that they played last year in the playoffs and could very well face again this year, was huge to end that downwards momentum. It remains to be seen if this is enough to be a catalyst for a winning streak.

After four straight losses, Vegas came out flying in this contest. Their first 20 minutes were among their best periods of this short season as they attacked the Avalanche and were the aggressors from the time the puck was dropped. Their great effort was rewarded as they held a two-goal lead after the first period.

Stephenson scored the first goal on a rebound that he managed to wack into the back of the net. He is the only healthy first-liner and therefore has had to shoulder a larger offensive workload than he is used to. Daniil Miromanov got an assist on the goal for his first NHL point.

The second goal of the period came while the Golden Knights were killing a penalty when Karlsson finished off a rush that was started by Reilly Smith. Smith was one of the standout players for the Golden Knights during this entire game and showed great leadership throughout.

This 20-minute stretch was a great building block that the Golden Knights can build on. They outplayed one of the best teams in the league despite being without their captain as well as a few other key pieces. It’s this type of hockey that they need to play moving forward.

One of the largest storylines through the early part of this season for the Golden Knights has been their power play. The unit has struggled to create scoring chances and has yet to score this season. That looked like it might change tonight as the power play was passing the puck around and moving the defense during the early part of the game. They even had a few good scoring opportunities.

However, later in the game when the Golden Knights got a long power play after a major penalty to Jack Johnson they didn’t manage to do much of anything. They struggled to even get set up in the offensive zone and the power play once again looked awful.

That power play opportunity marked a chance to put the game away but the Golden Knights couldn’t do it. It’s just the latest example of many as to why they need to figure out this power play issue sooner than later.

The Golden Knights did a great job of limiting the Avalanche’s top line. The combination of Nathan Mackinnon, Gabriel Landeskog and Mikko Rantanen is one of the most feared trios in the league but they were relatively quiet tonight. While they did help the Avalanche control the play while on the ice at 5-on-5, they couldn’t find the back of the net and that’s a win for the Golden Knights.

The Golden Knights will need to continue to take away their opponent’s best players if they want to win games. By limiting other team’s top options, it makes their opponents uncomfortable and gives the Golden Knights the upper hand. This is famously Bill Belichick’s approach that has made him so successful in the NFL.

“I just think we committed to defending hard,” said coach Peter DeBoer after the game. “You need to against that team.”

The Golden Knights play their next game tomorrow in Dallas as they take on the Stars. The puck drops at 5:30 p.m. Pacific time.