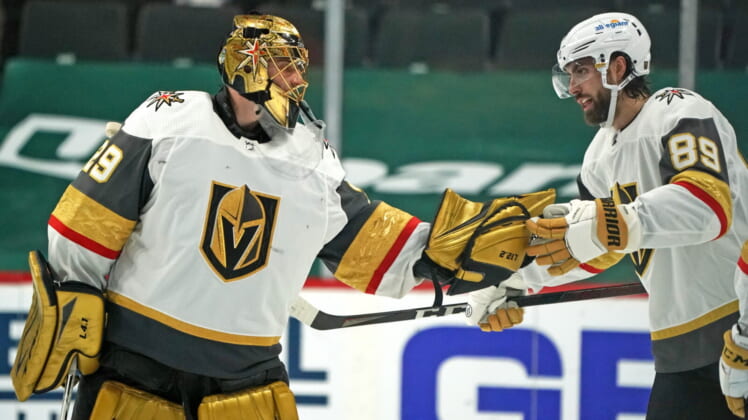 The Vegas Golden Knights beat the Minnesota Wild for the third game in a row to take a 3-1 series lead. This was their second straight win on the road, a significant achievement for a team with a history of struggling in Minnesota.

The Golden Knights are just one game away from advancing to the second round of the NHL Stanley Cup Playoffs after captain Mark Stone scored a huge shorthanded goal in the second period as Vegas pounded Minnesota 4-0 at the Xcel Energy Center in St. Paul.

Similar to Thursday’s game, a big call played a major factor yet again. Just like Game 3, a disallowed Joel Eriksson Ek goal meant that a Wild score was wiped off the scoreboard, giving the Golden Knights a second chance. Instead of being called off for offsides like it was last contest, Eriksson Ek’s first-period goal in this game was disallowed because of goaltender interference. It would have tied the game at 1-1, but instead, the Wild stayed scoreless, and the Golden Knights kept their lead. The Wild wouldn’t score the rest of the game.

The Wild were one of the best teams at home during the regular season as they went 21-5-2 at Xcel. Heading into this series, the Golden Knights had never won a regulation game inside the arena. Despite all this, the Golden Knights stole both games on the road, showing once again that trends are made to be broken.

“Like our group has done all year they ignored the noise, went to work, and got rewarded,” said Pete DeBoer. “And it starts in net.”

Now they head back home with a chance to end the series on Monday and get to rest before a probable series versus the Colorado Avalanche. T-Mobile Arena in Las Vegas is expected to host over 11,000 fans for Monday’s game after COVID-19 restrictions continue to be rolled back in Nevada.

Thus far, Marc-Andre Fleury has been the clear MVP for the Golden Knights in this series.

“We’re really excited to come back next game,” said Nicolas Roy, who scored twice in Game 4. “We’re really fortunate to play at T-Mobile.”

The Golden Knights have now scored nine straight goals in this series and haven’t allowed Minnesota to score in the last five periods of hockey. They hold all the momentum and will have a prime chance to close the series out when they host on Monday night.

The Golden Knights did an excellent job of keeping the lead once they were up 3-0 in the third period. They got pucks deep, back-checked, and were hard to play against, all traits that killed the Wild comeback before it started.

While the Wild may have more scoring in their depth pieces, the Golden Knights have better forecheckers and that became clear as the game wore on. Vegas relied on their depth to keep fresh skaters on the ice that could continue to make life hard for the Wild, and they did a great job.

“We did a pretty good job of taking away the rebounds,” commented Stone after the game. “I don’t think they got a ton of second chances. We made a pretty conscious effort of taking that away and that’s where they thrive.”

Stone leads by example as he is an outstanding defensive player himself, one of the best in the league with his stick. Having a leader like that is extremely beneficial for the Golden Knights who then see that same work ethic reflected up and down their lineup, creating one of the hardest teams in the league to play against.

Thus far, Marc-Andre Fleury has been the clear MVP for the Golden Knights in this series. He has won three Stanley Cups during his career and has the most playoff experience of any player on the Vegas roster. His play on the ice has been outstanding throughout the first four games and he has been the single driving force behind a few of their wins.

Saturday night was no different as the only puck that beat Fleury was eventually disallowed due to goaltender interference. This shutout moved him into third place on the all-time playoff shutouts list, just another of countless milestones and achievements that he continues to record.

“I feel good and my body feels good and my teammates have been great,” said Fleury after the game as remained humble. “I’ve been getting some goal support.”

Fleury saved 2.55 goals above expected in all situations, including nine of nine high danger scoring chances. The Wild have now scored just four goals over three games, nothing close to the numbers they need to contend in a playoff series.

It’s not often that a team has goals in back-to-back games waived off. It’s even more rare that those goals are both important ones in playoff games, but that’s exactly what has happened to the Minnesota Wild one the last two games.

If those two goals stand, these games could have turned out very differently as the Wild would have taken a large 3-0 lead in Game 3 and would have tied the game tonight in Game 4.

“I wasn’t sure right away,” said Fleury when asked about the disallowed goal. “But in my mind, I knew I didn’t over challenge outside the blue, that I stayed kind of deep, and that I still got bumped”

The Golden Knights video coach “Dave” has gotten mentioned more in the past two post-game press conferences than ever and he is (at least partly) responsible for the position the team finds itself in. Head coach Pete DeBoer made sure to also mentioned that Mike the goalie coach also has input on goaltender interference decisions.

“With an offside, it’s usually pretty clear, pretty obvious,” said DeBoer. “But with a goalie interference, you’re never sure.”

To the Golden Knights’ credit, they have done the most with the opportunities afforded to them from these overturned calls. They have used them to create momentum and reinforce their will on the Wild, demoralizing their opponents and establishing themselves as the aggressor.

The series returns to Las Vegas for a 7:30 PM PDT game on Monday night. At that point in time, the Golden Knights will have a chance to close out the series.