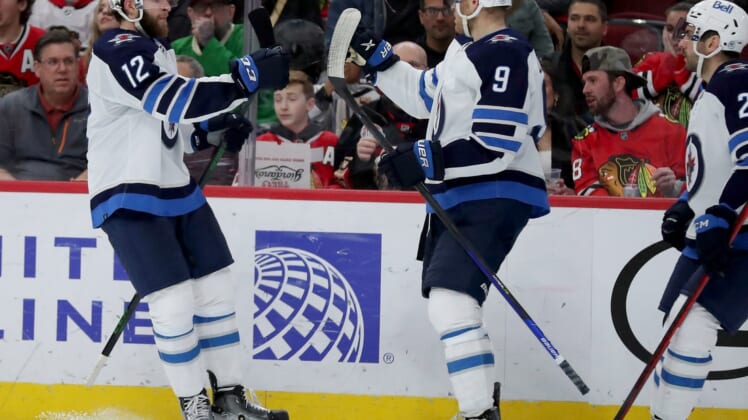 The Vegas Golden Knights will attempt to snap a six-game road losing streak when they face the Winnipeg Jets on Tuesday night.

It’s the second game of a back-to back set for the Golden Knights. Vegas, which holds a one-point lead over the Dallas Stars for the final wild-card spot in the Western Conference playoff race, was shut out for the fifth time this season on Monday, falling 3-0 to the Minnesota Wild in Saint Paul, Minn.

The Golden Knights have been outscored 26-11 during their road drought, including a 7-3 loss at Winnipeg on March 15. The seven goals were the most allowed in a game this season by Vegas.

The Golden Knights, already without eight injured regulars including captain Mark Stone, left winger Max Pacioretty, No. 1 goalie Robin Lehner and defensemen Brayden McNabb and Alec Martinez, lost three more starters on Monday. Forward Evgenii Dadonov, tied for third on the team with 15 goals, was traded to the Anaheim Ducks in a salary dump, and center Michael Amadio and defenseman Zach Whitecloud were put into COVID-19 protocol along with assistant Ryan McGill.

Defensemen Zack Hayes and Daniil Miromanov and forwards Paul Cotter and Jonas Rondbjerg were called up from the AHL Henderson, making it to the arena in Saint Paul about 15 minutes before pregame warmups, according to coach Peter DeBoer. Rondbjerg and Hayes played, with the latter making his NHL debut.

“No, I haven’t been part of a year like this,” DeBoer said when asked about all his team’s injuries this season. “So this is just the cherry on top. … There’s not a lot of moral victories at this time of year because you need the points. But I was proud of our effort.”

Vegas defenseman Alex Pietrangelo added, “Trade deadline day is never fun for anyone. Then we had a couple of COVID things going on. A lot of distractions and kind of a frustrating day, but I thought we put out a pretty good effort out there considering.”

Winnipeg can close within two points of Vegas with a win and also has two games in hand. Dallas has four more games remaining than the Golden Knights.

“We’re desperate right now,” Pietrangelo said. “We know where we are in the standings. We know what we need to do to get into the playoffs.”

Winnipeg is 6-3-1 over its past 10 games and is coming off a 6-4 road victory over the Chicago Blackhawks on Sunday. Jansen Harkins scored two goals and Kyle Connor added a goal and three assists to lead the Jets, who scored four straight goals in the second period while building a 5-2 lead.

“Put in a lot of work, so when the results come, I’m not surprised,” said Connor, who scored his career-high 39th goal. “It’s just a function of a lot of hard work and being ready for the opportunity when it presents itself. Feeling confident, feeling ready.”

Connor said the main focus is to continue to close the gap on Vegas for a playoff berth.

“Our mindset through this stretch … is focusing on that next game,” Connor said. “It’s what we can control. We can get two points every single night. It’s what’s on the table for us. We can’t control outside what is going on in the league everywhere else, so that’s what we’re focused on as a group. And I think we’ve done a pretty good job of narrowing our focus and taking that approach.”