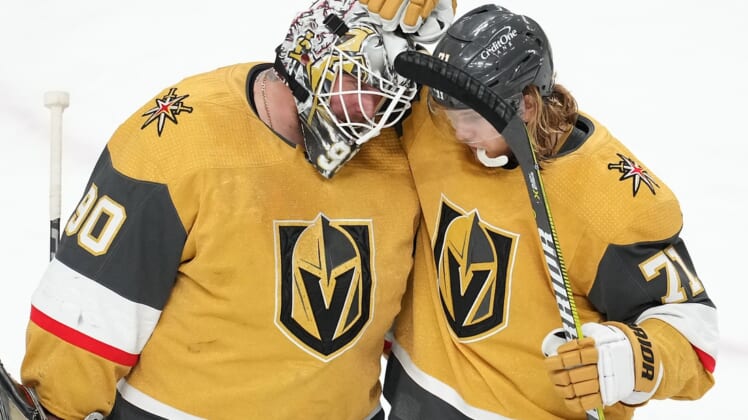 Brayden McNabb had a goal and two assists and Robin Lehner made 29 saves as the Vegas Golden Knights cruised to a 6-1 victory over the Arizona Coyotes on Saturday night in Las Vegas.

It was the first three-point of McNabb’s career. Evgenii Dadonov had a goal and an assist and Max Pacioretty, Zach Whitecloud, Jake Leschyshyn and Jack Eichel also scored goals for Vegas (40-29-4, 84 points), which moved into a tie with Dallas for the final wild-card spot in the Western Conference. Chandler Stephenson added two assists.

Barrett Hayton scored for Arizona (22-45-5, 49 points) which lost its third straight and for the 10th time in its last 12 games. Karel Vejmelka finished with 33 saves.

Vegas jumped out to a 2-0 lead in the first period with two goals in a 17-second span. Whitecloud got the first goal at the 6:23 mark with a sharp-angle shot below the right circle that went over Vejmelka’s left shoulder for his seventh goal of the season. Pacioretty, back after missing 12 games with an undisclosed injury, followed with his 16th goal of the season, tapping in a Stephenson pass to the front of the net through Vejmelka’s pads.

Arizona cut the lead to 2-1 midway through the period when Michael Carcone went around Alex Pietrangelo in the neutral zone to start a 2-on-1 break and passed to Hayton in the high slot where he fired a one-timer past Lehner for his eighth goal of the season.

The Golden Knights extended the lead back to two goals 38 seconds into the second period when Dadonov took a stretch pass from Shea Theodore, broke in on a breakaway and fired a wrist shot that hit Vejmelka in the glove and then trickled into the goal for his 18th goal of the season.

McNabb made it 4-1 at the 5:24 mark of the third period with a long shot from the left point through traffic for his third goal of the season and first in 45 games. Leschyshyn added his second goal of the season with 7:55 left, and Eichel added a breakaway goal with 2:22 to go, the 150th goal of his career.