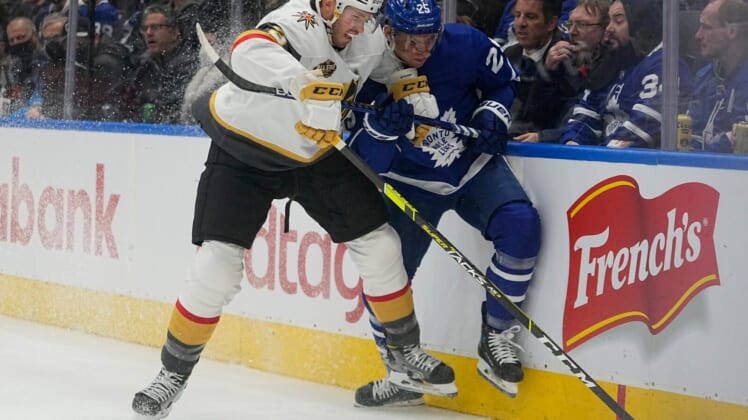 The Vegas Golden Knights entered Tuesday night’s game against the Toronto Maple Leafs winners of three straight and having finally built some positive momentum for the first time this season. Unfortunately, that streak ended last night as the Maple Leafs shut out the Golden Knights in a 4-0 victory. Auston Matthews scored twice, William Nylander added one, and Mitch Marner had the final goal alongside two assists.

Golden Knights head coach Peter DeBoer decided to tinker with the lineup before this game. He shuffled the lines to spread out the talent available to him more evenly as he continues to deal with a significant amount of injuries. William Karlsson was held out of this contest and won’t be available for the next few weeks as he deals with a broken foot, only adding to the long list of injured players.

“Big ask tonight when you look at what we’re dealing with,” said DeBoer postgame. “I think our effort actually wasn’t an issue, I just think we didn’t execute.”

The decision to roll with lines that were more or less equal didn’t result in a positive outcome for the Golden Knights. They couldn’t even muster a goal and looked shell-shocked at the start of the game as the Leafs attacked early and often. This was a performance to forget for the Golden Knights and they will now look to turn their attention to their game on Thursday against the Ottawa Senators.

The amount of injuries that the Golden Knights are dealing with at the moment presents a massive challenge and it’s impressive that the team is still sporting a record that is close to .500. However, against the Leafs the difference in top-end talent was extremely noticeable as the Leafs’ best players showed out while the Golden Knights didn’t have the firepower to match up.

With a complete lineup, the Golden Knights would have likely been able to answer back, however without Mark Stone and Max Pacioretty that just wasn’t possible. This left Alex Pietrangelo with a huge responsibility to help the forwards create offence from the backend. While he gave it a solid shot and was noticeable throughout the night, that was too tall of an ask.

The Leafs have assembled some of the best elite talent in the league and it was on full display as they got goals from their top-of-the-lineup players. The most impressive came from Mitch Marner who snuck one past Robin Lehner to open the scoring.

This was the second time that the Golden Knights have been shutout this season. While the injuries are the major storyline and feed into the team’s weak offensive performances, at the end of the day they need to find a way to put the puck in the back of the net no matter what is going on. That didn’t happen against the Leafs and it cost them.

DeBoer wasn’t happy with the way that his original lines were performing and made changes early in the first period. Nothing seemed to help as the Golden Knights just looked overwhelmed the entire night. They surrendered the first fifteen scoring chances of the game and looked like the much weaker team.

“It’s a frustrating game. We need to be better,” said Brayden McNabb after the game.

The onus now lies on players like Evgenii Dadonov, Reilly Smith, and Jonathan Marchessault to punch above their weight and score a few big goals. While it’s a lot to ask of them to produce at elite levels, they have shown the ability to do so in the past and will be trying to step up for their team during their teammates absences.

The Golden Knights play on Thursday at 4 PM Pacific Time against the Ottawa Senators on the road. They will look to turn things around and get two points against a weaker Eastern Conference foe.