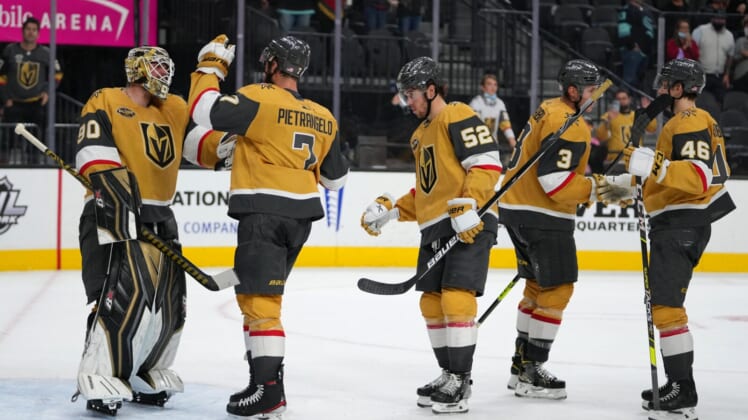 The Vegas Golden Knights got their second win of the season in as many tries over their expansion rivals, the Seattle Kraken on Tuesday. The Golden Knights beat the Kraken after they fell behind twice in this game but stuck around long enough to make things interesting before scoring twice in the third period to complete a 4-2 victory. Alex Pietrangelo, Evgenii Dadonov and Reilly Smith were the goal-scorers for the Golden Knights.

The Golden Knights opened their season with a 4-3 home win over the Kraken on Oct. 12

The Golden Knights managed to weather the storm during the second period when it seemed like the Kraken were everywhere. Robin Lehner played great during those 20 minutes, as he has all season, and made several big saves that kept the game close. The Kraken had 11 scoring chances compared to only three for the Golden Knights during the middle frame, but they couldn’t build themselves a significant lead.

The Golden Knights scored their first three goals close to period breaks as the first two came with under a minute remaining in each of the first two frames, while the third was just a few seconds into the final period. The opportune scoring was crucial to their victory as they start this homestand by taking a crucial two points against a division rival.

“That’s a huge momentum swing to tie the game up going into the third period like that,” Smith said after the game. “Those goals change everything. We haven’t been able to score a lot of them this season but when you do you see the difference it makes.”

Jack Eichel was in the building Tuesday night for the first time as a member of the Golden Knights, though he’s still a few months out from playing in a live game. Still, his presence was enough to get the fans going rabid at the prospect of him atop the team’s lineup.

Power play comes through in clutch

The Golden Knights power play struggles have been well-documented but on Tuesday the unit pulled through with a huge third-period goal. Smith finished off a pretty passing play from in tight and his second goal of the game doubled the Golden Knights lead to two.

It was a nice touch pass by Jonathan Marchessault to set the goal up in front as the two forwards displayed some of the chemistry that makes their “Misfits Line” alongside William Karlsson so devastating.

The Golden Knights finished the game with an even scoring differential on special teams, a large improvement over some of the devastating recent performances. That was one of the keys to victory as they slowed things down at 5-on-5 and took full advantage of their limited opportunities.

The Golden Knights displayed that they know how to play with a lead as they locked things down in the third period. They didn’t allow a high-danger scoring opportunity and only permitted the Kraken to get seven shots, making things relatively easy for Lehner.

The Kraken only managed to control 23.7% of the expected goals in the third period in all situations, their worst mark across all three periods. It was a large role reversal from the second period when the Kraken were the aggressors and it felt as if a goal was always coming soon.

By putting on a masterclass of how to play with a lead, the Golden Knights guaranteed themselves two points and shut the door on a Kraken comeback. After their large lead in the first matchup between these two teams was almost squandered, the Golden Knights did everything in their power to ensure there wasn’t a repeat of that situation.

Don’t look now, but the Golden Knights have won six of their last eight games with their only losses coming against non-conference foes. This has rocket-shipped them up the standings and they now sit comfortably a few points back of the leader in a glut of middling teams.

The good news for the Golden Knights is the start of this season has been nightmarish for them and things can’t possibly stay this bad for long. They’ve had to deal with injuries to virtually all of their star players yet still can clearly see a playoff spot.

“We weren’t panicking. We have a lot of belief in our group and our depth.” said Lehner when asked about the team’s slow start.

If they continue to pick up points at the pace they have over the last few weeks, the Golden Knights could find themselves challenging to be division leaders despite missing their entire first line. That idea has to be a very scary thought for rivals across the league.

The Golden Knights play their next game on Thursday as they host the Minnesota Wild. The puck will drop for that game at 7 p.m. Pacific Time.