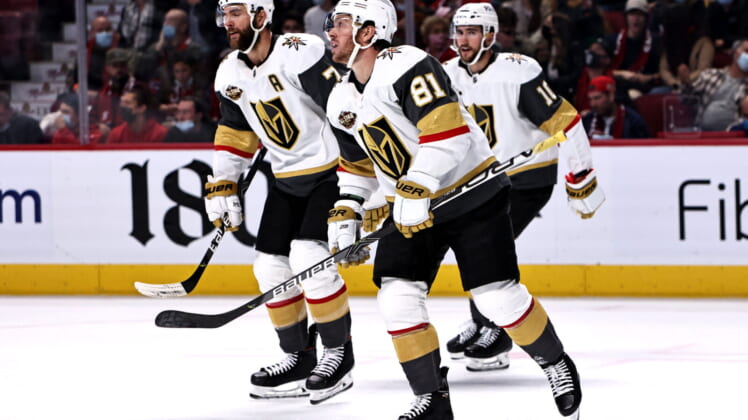 The Vegas Golden Knights beat Montreal 5-2 on Saturday, scoring five goals for the second straight game . The game was much closer than that three-goal deficit indicates and for the first 20 minutes the Golden Knights were punched in the mouth by the Canadiens. It was complete and utter domination the likes of which are rarely seen in the NHL.

However, the Vegas would have a much better final 40 minutes of the game and rallied to escape with two points. The comeback started when Alex Pietrangelo scored on the power play, a first for the Golden Knights this season. From there, the Golden Knights added another two quick goals to take a 3-2 lead which they held until the Canadiens were forced to pull their goalie.

Robin Lehner had another great game as he made 36 saves and kept the Golden Knights close while they were under attack in the first period. The power play converted both of their opportunities, sparking the offense that the Golden Knights desperately needed.

The first period was the worst 20 minutes that the Golden Knights have played this season, and there have been some terrible periods. They were outshot 20-1 by the Canadiens and allowed 16 scoring chances compared to only creating one for themselves.

They were lucky to leave the period only down by two. A big part of that was Lehner’s play as he made a couple of huge stops. He’s been great this entire season and has made the departure of Fleury much more manageable, especially considering that Fleury has struggled with his new team the Chicago Blackhawks.

The first period put an ominous feeling over the game and after 20 minutes it felt as if this might be another one of the Golden Knights weak efforts this season. However, they managed to turn things around and completely flipped the narrative.

The struggling power play has been one of the biggest stories for the Golden Knights over the past two seasons. This year has been especially bad as the unit had not scored a goal until this game. These missed opportunities have cost the Golden Knights points in the standings.

Tonight they converted both of their opportunities as Pietrangelo and Dylan Coghlan each scored in the second period. Taking this momentum forward will be crucial for the team as they look to stay afloat in the standings until their star players return.

The Golden Knights have won five of their last six games and have started to pick up steam after a terrible start. This has allowed them to stay semi-competitive and not fall to the basement. As long as they can stay within earshot of the playoff spots then they will be fine when their stars return.

Besides the improved offense that has allowed them to win games even when they fall behind, Lehner has been one of the major reasons for these wins. He’s been exceptional by making timely saves and through being a rallying force that the rest of the group can gather around.

The Golden Knights play again Sunday against the Detroit Red Wings. The puck drops for that game at 3 p.m. Pacific Time.