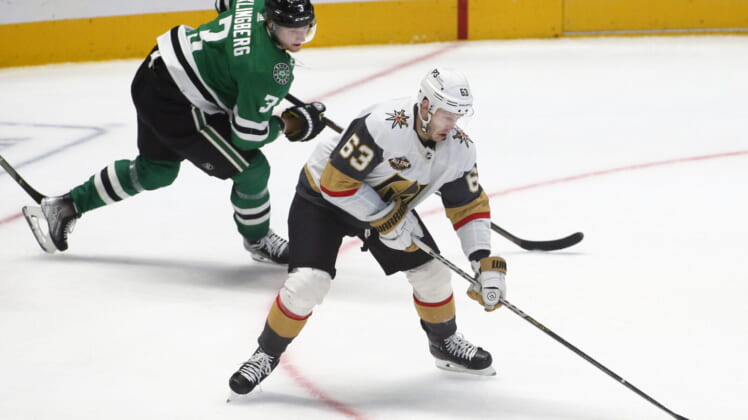 For most of the game Wednesday night, the Vegas Golden Knights were outplayed by the Dallas Stars in every facet of the game. They were losing in every major statistical category and were only able to remain within striking distance because of their excellent goaltending. When everything looked bleak, it was Jonathan Marchessault who came through with the tying goal late in the game on their way to a 3-2 overtime win.

Marchessault’s goal sent the game to overtime where Evgenii Dadonov picked the perfect time to score his second goal as a Golden Knight, ending the game with a nifty shot from in front of the net. It was a couple of newcomers in Dadonov and goalie Laurent Brossoit who were the saviors tonight.

This marked the end of a mini two-game road stint for the Golden Knights. They return to Nevada having secured all four points that were up for grabs over the two games. That’s huge for a team that found themselves at the bottom of the Pacific Division after some early-season struggles.

With the Golden Knights down one goal late in the game but unable to get any momentum moving forward, head coach Peter DeBoer threw his lineup in the blender and shuffled his players around. He even took the drastic step of splitting up the “Misfits Line” of Marchessault, Reilly Smith, and William Karlsson.

While these different combinations all had varying degrees of success, the Golden Knights did have a solid period of sustained pressure in the third period while some of these new lines were playing. It was their best stretch of the game and they were rewarded with a late goal, though that was with the goalie pulled and an extra man on the ice.

One of the most interesting lines that DeBoer used tonight was putting Marchessault with Chandler Stephenson and Dadonov. While the three played only a grand total of 3:31 together at even-strength, they did control play during that time as they had a CF% (Corsi Percentage) of 75%.

Brossoit makes his debut as a starter

Brossoit made his debut as a starter for the Golden Knights and turned in a performance that was deserving of a win. When the Golden Knights were getting severely outplayed for the majority of the first 40 minutes, it was Brossoit that was bailing them out with big save after big save. He was the team’s best player tonight and deserves all the praise for this performance.

After the Golden Knights got rid of Marc-Andre Fleury this summer, there were major question marks on if they made the right decision. The combination of Fleury and current starter Robin Lehner was the best in the league last season and having two starting-caliber goalies was crucial to the Golden Knights success. Tonight, Brossoit proved that there doesn’t have to be a major drop-off from that level of production.

“We needed our goalie to be our best player and he was.” commented DeBoer.

Brossoit’s low salary of just $2.35 million is one of the biggest reasons why the Golden Knights were able to afford to bring in Dadonov this summer who conveniently scored the overtime winner tonight. Brossoit saved 1.27 goals above expected tonight and combined with Lehner he has helped the Golden Knights have some of the best goaltending so far through this short season.

The Golden Knights were the weaker team for the majority of this game and were thoroughly outplayed. They finished with only 21 shots compared to 34 for the Stars, 1.2 expected goals to 3.27, and only 26 scoring chances against 49. It was not a good performance but they still managed to escape with two points.

“Their forecheck in the first and second periods was amazing,” said Marchessault after the game, “we were having a hard time getting out of the zone but LB [Laurent Brossoit] kept us in the game.”

The Golden Knights like to think of themselves as Stanley Cup contenders but so far this year they haven’t resembled anything close to that. Tonight was the type of game where great teams steal two points while average ones roll over. They were on their second game of a back-to-back, both games were on the road, and all the momentum was against them. They still got the two points that they needed.

“It was a gutsy road trip,” said coach DeBoer after the game, “and a gutsy win today.”

It was a massive performance for a Golden Knights team that desperately needed a spark to turn their season around. These two games have the potential to be some of the most important of the season as they’ve ended their losing streak before it could get out of hand. Now the trouble becomes keeping this positive momentum going.

The Golden Knights play their next game on Friday when they host the Anaheim Ducks. The puck drops for that game at 5 p.m. Pacific time.