PREVIEW: Golden Knights look to close out Avalanche on home ice in Game 6 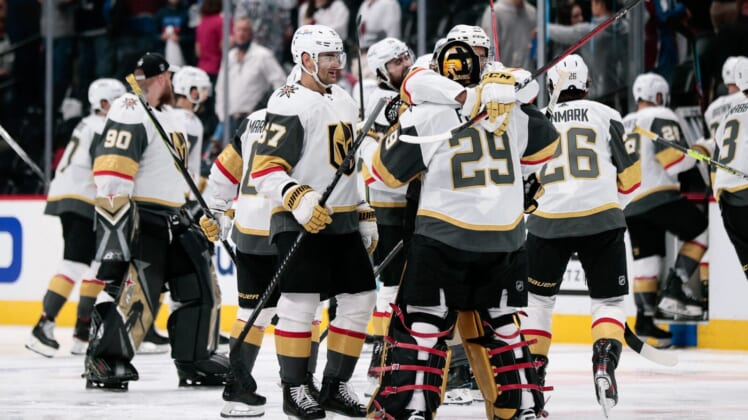 After an improbable comeback in Game 5, the Vegas Golden Knights now find themselves returning home with a chance to eliminate the President’s Trophy champion Colorado Avalanche. It’s been an unlikely turn of events for a Golden Knights team that dropped the first two games of the series, including a Game 1 where they were embarrassed 7-1.

We have some guys who have had long playoff runs and we’re only in the second round. That extra boost from our fans is going to be real critical…

However, it’s the sign of a good team that you can forget bad losses and continue fighting, and that’s exactly what the Golden Knights have done during this series. From Game 2 on, they have taken full control and haven’t let their foot off the gas for very long, outscoring the Avalanche 13-8 over those games.

Now the Golden Knights face their biggest challenge yet: Can they finish the job and send the Avalanche home? It’s something that they have struggled with over the past few seasons and one must not look past the last series against the Minnesota Wild for evidence of this issue. The Golden Knights allowed the Wild to climb back into the series after having them on the brink of elimination in Game 5.

Despite winning Game 5 on the road, a do-or-die Game 7 in Denver is not a situation that the Golden Knights would want. Finishing the job tonight in Las Vegas is of the utmost importance, and the good news is that they have been great at home all season. The fans in T-Mobile Arena always do a great job of showing up for the Golden Knights, and tonight, their presence will be more crucial than ever.

“We have some guys who have had long playoff runs and we’re only in the second round,” said head coach Peter DeBoer the day prior to Game 6. “That extra boost from our fans is going to be real critical tomorrow.”

Winning four straight games against any NHL team is hard; it’s almost unheard of against the best team in the league during the playoffs. However, that’s the position the Golden Knights have put themselves in, and they have a chance to pull off that unlikely feat tonight.

One of the largest advantages afforded to NHL teams when they play at home, besides the energy of their home crowd, is the ability to have the last change. This means that the home team can see which line their opponents have put out and match accordingly. Some coaches will match lines religiously while others don’t care for it, but it becomes a chess move that can change the entire series when you have a defensive player like Mark Stone.

Nathan Mackinnon is one of the best players in the league and made the St. Louis Blues look like a junior hockey team in the first round of these playoffs. He’s big, fast, and supremely skilled and plays with two other great players, making it impossible for opposing teams to key in on him. He’s the perfect modern power forward and put together a case for the Conn Smythe Trophy until he ran into Mark Stone.

Stone, alongside linemates Chandler Stephenson and Max Pacioretty, has done as good a job as anyone at making life difficult for Mackinnon. In this series, he has shown why he was a deserving nominee for the Selke Trophy, awarded annually to the best defensive forward. In-Game 5 in Colorado, Avalanche coach Jared Bednar kept Mackinnon away from Stone but now that the series is back in Vegas, it’ll be up to DeBoer to decide how he wants to use Stone, the ultimate chess piece.

Marc-Andre Fleury has been in Vegas since the expansion draft and has been one of the team’s most important players for the duration of those few years. He has been proving his value once again throughout these playoffs as he has been excellent in net, not to mention the Stanley Cup Playoffs experience he brings to the team off the ice.

Fleury has a goals against average of 1.98 and a save percentage of .914% thus far this series, both very impressive numbers especially considering the Avalanche’s embarrassment of riches. He made a huge save just a few seconds into overtime last game, keeping the Golden Knights alive in a game which Stone ended shortly after.

Fleury also is no stranger to the pressure and ups and downs of the NHL playoffs, as he has gone on many deep runs throughout his career with the Golden Knights and Pittsburgh Penguins. That experience was on display in Game 5 when Fleury let in a soft goal with less than a second left in the first period. He didn’t beat himself up for it and turned in a great performance the rest of the way that ended with a Golden Knights victory.

The Avalanche are playing for their lives tonight and the Golden Knights are going to need to be on top of their game to get the victory and advance to the next round. The game starts at 6 PM PDT in Las Vegas.