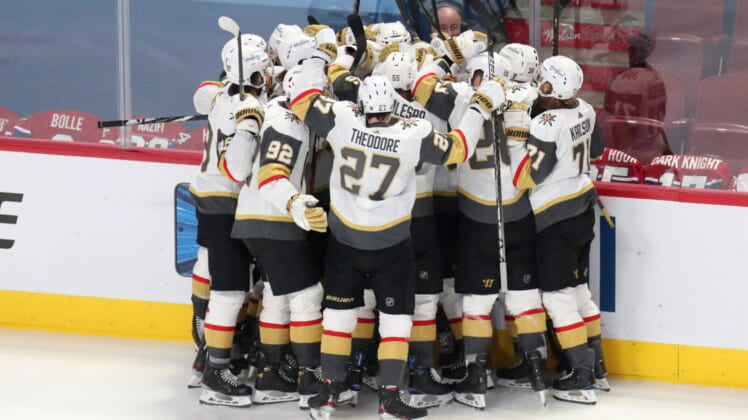 After a disappointing playoff exit at the hands of the Montreal Canadiens last season, the Vegas Golden Knights made a few major offseason moves as they prepare to take another run at the Stanley Cup. The most notable among them is the departure of goalie Marc-Andre Fleury, a player who has embodied what it means to be a Golden Knight from the time that the franchise was created.

The salary cap dollars that were saved by the departure of Fleury have been reallocated to other areas on the roster, hopefully giving more balance to a team that had one of the most expensive goalie combinations in the league, though one could argue that the production they received warranted it.

Missing three opportunities at the Stanley Cup finals is huge and it’s fair to ask how many more chances the Golden Knights will get, especially when you look at teams such as the Colorado Avalanche who seem set to run the conference for the foreseeable future.

How will the goaltending hold up without Fleury?

Marc-Andre Fleury was one of the Golden Knights’ best players last season and was rewarded for his excellent season with the Vezina Trophy. Not only does Fleury have an outsized impact on the ice, but he also helps massively with everything that happens off the ice as he brings years of veteran experience including many deep playoff runs.

There’s no question that Fleury helped the Golden Knights in this past postseason during moments such as rebounding from a drubbing in Game 1 of the series against the Colorado Avalanche. Robin Lehner will now move from the backup role to the starting position. The good news is that Lehner isn’t your typical backup, instead, he’s had success at the NHL level and was pushed into that role because of Fleury.

Still, Lehner has never been the main option for a team with Stanley Cup aspirations and he sure doesn’t have the scintillating playoff record that Fleury does. Laurent Brossoit was brought in to help ease Lehner’s transition and the Golden Knights will hope that the two of them can help the franchise forget about Fleury sooner than later.

Can the Golden Knights find a way to score when it matters?

One concerning trend that the Golden Knights hope to kick is their struggles putting the puck in the back of the net during the postseason. The Montreal Canadiens shut them down on their way to the Stanley Cup finals despite the Golden Knights buzzing in the offensive zone for long stretches of games. This trend can be traced back to the two series against the Vancouver Canucks and Dallas Stars during the bubble in Edmonton.

To combat this issue, the Golden Knights are going to be heading into this season with a few new players that should hopefully give them more of a scoring punch. The big offseason acquisition was Evgenii Dadonov from the Ottawa Senators. He should fill in on one of the middle-six wings and offer the Golden Knights a depth scorer that they haven’t had in the past.

Peyton Krebs is a young player with plenty of offensive potential that the Golden Knights hope can make the leap to the NHL this season. Krebs was drafted 17th overall in the 2019 NHL Draft and scored 43 points in 24 games for the Winnipeg Ice in the WHL this past season on his way to earning the WHL Player of the Year award. He will be given multiple opportunities to show off his talent with good linemates.

How much longer is the Golden Knights window of contention going to stay open?

The Golden Knights have now made three of the last four semi-finals. Despite this success, they still have only one loss in the Stanley Cup finals to show for it. The NHL is a fast-paced league and windows close just as fast as they open for many teams. Missing three opportunities at the Stanley Cup finals is huge and it’s fair to ask how many more chances the Golden Knights will get, especially when you look at teams such as the Colorado Avalanche who seem set to run the conference for the foreseeable future.

The Golden Knights cannot allow any more opportunities to slip through their fingers as they do not know how many more they will get. Taking advantage of this season where they are playing in the weakest division in hockey is crucial as it could be the last chance they get before their window starts to close.

For more Vegas Golden Knights analysis, make sure to come back to Vegas Sports Today.com all season long.