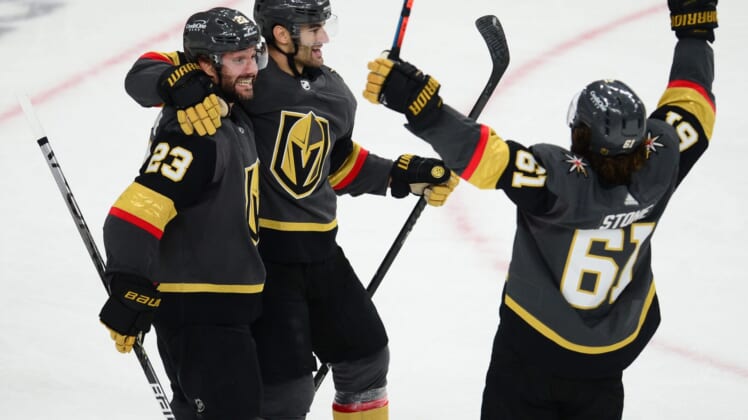 It doesn’t get much better than NHL playoff hockey and Thursday’s game between the Vegas Golden Knights and Colorado Avalanche was cream of the crop playoff hockey.

The game featured everything you could ever want: plenty of goals, numerous big saves, and tons of big hits and nasty plays. When the final horn blew, the Golden Knights prevailed 6-3, eliminating the Colorado Avalanche in six games.

Usually, you ask your fourth line to keep the puck deep in the opponent’s zone and not get scored on. The Golden Knights fourth line did that perfectly tonight as they only allowed one shot at 5-on-5 while on the ice together.

The Avalanche and Golden Knights have been in a tier by themselves at the top of the NHL for the entire season, and this series was much anticipated. Heading into tonight’s game, it was clear that the Avalanche would not go down without a fight as no team that good rolls over when their season is on the line. From the opening whistle, the Avalanche played hard, and their efforts were rewarded just 23 seconds into the game when Devon Toews scored on a shot that beat Marc-Andre Fleury cleanly.

That Avalanche lead would last for less than a minute before a shot from Nick Holden tied the game at one when it beat a confused Phillip Grubauer. Those 52 seconds would be the only time that the Avalanche led throughout this entire game. From there, fans were treated to a shootout that went back and forth, with the Golden Knights taking one-goal leads but the Avalanche equalizing over and over.

Alex Pietrangelo put home a rebound with less than twenty seconds left in the second period that gave the Golden Knights a 4-3 lead that they would never relinquish. Pietrangelo was a major offseason acquisition for the Golden Knights, and he showed up in a big way tonight as he added an assist to that goal and ate up 23:43 of ice-time.

The Golden Knights will stay in Las Vegas before they host the Montreal Canadiens. That series will start on Monday at 6 PM PT. Before our coverage shifts to the semi-finals, let’s recap some of the biggest storylines from tonight’s game.

After removing Ryan Reeves from the lineup last game, coach Peter DeBoer re-inserted him for tonight’s matchup. He played alongside William Carrier and Keegan Kolesar, and the trio came up big in the most important game of the season.

Usually, you ask your fourth line to keep the puck deep in the opponent’s zone and not get scored on. The Golden Knights fourth line did that perfectly tonight as they only allowed one shot at 5-on-5 while on the ice together. In addition to fulfilling that role, they also scored two of the biggest goals of the game that secured the victory.

With just over five minutes left in the second period and the game all tied up at two, Kolesar got his stick on a point shot and redirected it towards the open cage. That goal broke the tie and gave the Golden Knights a 3-2 lead, though they would give it back just a few minutes later. Still, the goal from the fourth line was much appreciated, especially in a game as big as this one.

Later on, with the Golden Knights holding onto a one-goal lead halfway through the third period, Carrier ended up whacking a puck into the back of the net. This gave the Golden Knights the insurance goal they needed and forced the Avalanche to play even riskier.

“We [the fourth line] were talking about trying to chip in with goals and get some big goals for the team” said Carrier after the game.

The Golden Knights ended this series 3-0 at home as they fed off the energy from the fans and defended home-ice perfectly. This meant that all they needed to was steal one game on the road, something they did in Game 5 with a big comeback.

Losing the first two games on the road meant that winning at T-Mobile was only that much more crucial. Despite that, the team clearly believed that they would be fine as long as they took care of business while at home.

“We knew coming in that fortress that if we could get two big wins we would be good.” said Kolesar. “Feed off that energy [from the fans].”

Another aspect of playing at home is getting the last change, and that was something that was getting a bit more attention in this series because of the defensive abilities of Mark Stone. Stone has done a great job of shutting down Avalanche’s top line and was a matchup against them plenty in the first two games in Vegas. If there was any doubt about if that would change, it was quickly erased after the first period.

The Golden Knights will look to continue that success at home in the next round against the Canadiens. Because they play in the Canadian division, the Canadiens haven’t had the opportunity to play against a full arena team. The Golden Knights may take advantage of that fact and win two quick games to start the series on the right foot.

A culture of excellence in Vegas

The Golden Knights now advance to their third semi-finals in their first four years of existence. This is an impressive feat for any team, much less one that was predicted to struggle when they entered the league. The Golden Knights have quickly become one of the most successful franchises across the entire league and have built a winning culture while at it.

“It’s [the Golden Knights’ track record] pretty impressive,” commented Pietrangelo. “It’s a winning culture that has been here since the first year. Different guys have come in, but it’s the same culture.”

It’s that same type of culture that has allowed the Golden Knights to acquire and keep players like Stone and Pietrangelo that have taken them to the next level. They have become a destination that players want to go to, and they have shown an ability to get the most out of players.

While making the conference finals is an impressive achievement, Stanley Cups are what matter and, the Golden Knights haven’t won one yet. After reloading this offseason in preparation for this run and dismissing the President’s Trophy champions, you can guarantee that the Golden Knights have their eyes on the prize.