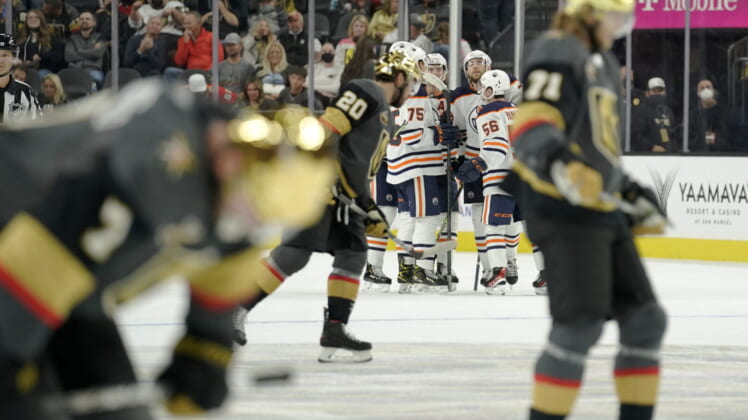 The Vegas Golden Knights played one of their better games of the season thus far but were still rewarded with 0 points as they fell to the Edmonton Oilers by a score of 5-3. The goal scorers for the Golden Knights included Nicolas Roy, Nolan Patrick and Nicolas Hague.

The Oilers, playing their second game in as many nights after a win against the Arizona Coyotes yesterday, continued to dump the puck into the Golden Knights zone as they tried to hold onto their lead during the second half of the game. The Golden Knights attacked in waves but couldn’t find that equalizer that they desperately needed.

Zach Whitecloud left the game early after blocking a shot and never returned. The Golden Knights are already without a significant chunk of their roster and Whitecloud’s departure didn’t help their defensive core that was already missing Alec Martinez after he got hurt last game. After the game his condition was described as “not good” by head coach Peter DeBoer

The Golden Knights are now 1-3-0 after their first four games and give up two points to the Oilers who lead the division with a 5-0-0 record. This isn’t the start that the Golden Knights were wishing for, but it has been difficult for them with all the injures. Judgment must be saved for a full roster.

“We’ve got time here to get it right and get it figured out,” DeBoer said postgame.

Oilers superstars show why they’re among the league’s best

The Oilers superstars were the ones who decided this game. The offseason addition of Zach Hyman has paid many early dividends as he scored twice tonight to raise his season goal total to five. Connor McDavid was his usual brilliant self as he picked up two assists, one on each of the two Hyman goals.

Leon Draisaitl, not to be forgotten, scored the goal that put the Oilers ahead 3-2 for his third of the season and then added an empty netter. Those three players were forces to be reckoned with the entire night as they constantly terrorized the Golden Knights defense.

Playing shorthanded without Whitecloud only made the challenge of trying to stop these offensive dynamos that much harder. The Golden Knights will need to figure out a more effective strategy as they will face the Oilers a few more times this season.

In what has become a very concerning trend for the Golden Knights, they didn’t manage to capitalize on their power play opportunities while they also failed to stop the Oilers on theirs. Granted, it’s difficult to slow down a unit that includes McDavid, Draisaitl, and Hyman all together, but it’s hard to win hockey games when you get outplayed so badly on special teams.

The Golden Knights even had a lengthy 5-on-3 in the first period that lasted for over a minute and a half. Despite having two more players on the ice than the Oilers, they couldn’t find a way to put the puck in the back of the net and didn’t convert on the ensuing 5-on-4 either. This sequence kept the game tied at one instead of giving the Golden Knights an early game lead, although they did eventually score the next goal.

At this point in time, the power play issues are much worse than the penalty kill. They are approaching a historically bad level and there aren’t many reasons to be positive. Midway through the third period, the Golden Knights got a power play while they were down by one goal. They failed to score and that was the game. While they will occasionally have a stretch that looks semi-dangerous, overall the unit has been absolutely terrible for too long now. Fixing that will be a season-long endeavor.

After the game. Oilers forward Zack Kassian agreed as he said, “I think our special teams won for us here.”

With their usual first line still battered by injury, the Golden Knights had Roy and Peyton Krebs skate beside center Chandler Stephenson. Krebs has been used up and down the lineup during his second NHL season and Roy has been a mainstay on the top line while Mark Stone and Max Pacioretty are out.

This was the best game by any combination of a makeshift first line that DeBoer has used recently. Krebs impressed on that top line and the three of them helped direct the action towards the Oilers’ net while they were on the ice.

The Golden Knights have one night off before they are back at it on Sunday at home against the New York Islanders. The puck drops for that game at 7 p.m. Pacific time.