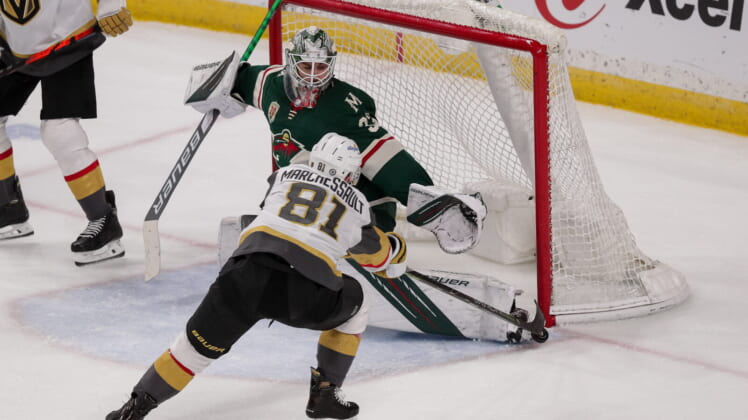 The Vegas Golden Knights missed winning the Presidents Trophy by a thin margin but are poised – and perhaps finally built – to make a run at the Stanley Cup.

Despite all their regular-season dominance, the Vegas Golden Knights will not consider this season a success without a Stanley Cup, or at least a legitimate run at one. They begin their journey with a seven-game series against the Minnesota Wild, a team that gave the Golden Knights fits during the regular season.

A win in the series against the Wild would likely see the Golden Knights face the Colorado Avalanche in the ensuing round, pitting the two Cup favorites against each other in only the second round. However, in the NHL playoffs anything can happen and every opponent must be given the attention they deserve, especially when they are a complete team as the Wild are.

To win this series, the Golden Knights will need to rely on their strong goaltending to show up as well as take away the Wild’s top options. Finding a way to contain players such as Kirill Kaprizov and Kevin Fiala and stop them from getting on the scoresheet will be crucial. Not folding under the pressure of the moment even more so.

Who Has Statistical Advantage?

Looking at the numbers for this matchup, the first one that jumps out is the 5-1-2 record for the Wild during the regular season matchups between these two teams. No other NHL team was as successful against the Golden Knights and finding a way to exorcise those demons will be key for Vegas.

Marcus Foligno had seven points in six games against the Golden Knights and Kaprizov had eight points across eight games, including six goals. Not only can these players score, but they also play a solid defensive game. This two-way effectiveness is something that stands out across the Wild roster, helping them finish the season with a +21 goal differential.

Of course, that +21 goal differential pales in comparison to the league-leading +67 number from the Golden Knights. A big reason for their success this season has been the play of goaltending duo Marc-Andre Fleury and Robin Lehner. The two combined to win the William M Jennings Award for lowest combined goals-against average and provided a steady presence all season long.

How the Golden Knights Win

Fleury and Alex Pietrangelo are both former Stanley Cup Champions that now occupy leadership positions. The NHL Playoffs are one of the most grueling and draining stretches across all the professional sports and that veteran leadership experience will be important to keep the ship steady in rocky seas.

The additions of Max Pacioretty and Ryan Reaves inject some scoring and physical play into an already strong Vegas lineup. The complete defense core that features some of the league’s best puck movers gives the Wild fits as they throw the puck up ice with ease.

Kaprizov goes quiet in his first taste of NHL Playoff action and the Wild struggle to get much attacking without him. The only thing worse than their scoring prowess is their goaltending as Cam Talbot is chased early and the Wild fail to find any sort of consistency in that area.

How the Golden Knights Lose

The pressure is too much. Expectations of a Stanley Cup final run weigh down as the Wild take a quick lead. Coach Peter DeBoer feels the series slipping away and switches the goalies incessantly, leading to neither getting into a rhythm.

The Wild make few mistakes, frustrating the Golden Knights. When they see an opening, Kaprizov and Fiala take advantage of their lethal shots as they score goals from long distances. One of Cam Talbot or Kaapo Kahkonen seize the Minnesota crease and provide strong enough goaltending, it doesn’t need to be excellent just consistent.

Max Pacioretty and Ryan Reaves struggle as they return from injury and the team takes a game or two to get their chemistry back. By this point, the Wild have a commanding lead and are able to play a more defensive style as they wait for the Golden Knights to make mistakes, winning low-scoring games.

Of course, this is a bleak scenario but one that is very much possible if things bounce a certain way.

If the Golden Knights do these three things, they’ll win this series against the Wild:

1. Pressure the Puck and Forecheck Hard

The Golden Knights have a few big bodies that can also skate, creating forechecking monsters. Getting the puck in deep and then pressuring the Wild defencemen will be an effective strategy to create turnovers and offensive pressure.

The Wild are one of the worst teams at possessing the puck while exiting their own zone (as shown in the tweet above) and the Golden Knights are one of the better puck retrieving teams, recovering the puck on 37.7% of their dump ins as per @JFreshHockey on Twitter.

2. Find a Way to Score with the Man-Advantage

For as good of a team as they are, the Golden Knights do not have a very effective power play unit. They converted on just 17.8% of chances this season, a number that placed them in the bottom third of the league. In the playoffs, games can get tighter and power plays become even more crucial as goals become scarce.

It’s one of the most glaring issues for a team that otherwise has been dominant. With potential quarterbacks like Shea Theodore and Pietrangelo, along with snipers Mark Stone and Max Pacioretty, there is no reason they shouldn’t be able to put an elite unit together.

3. Steal Games on the Road

The numbers are shocking. The Golden Knights have never won a game in Minnesota at Xcel Energy Center during their brief existence. You cannot go on a playoff run while only winning games at home and the Golden Knights will need to find a way to flip that trend on its head to win.

Stealing games on the road while you hold your home-ice advantage is one of the strongest formulas for playoff success. Considering they haven’t shown an ability to do that against the Wild yet, coach DeBoer is going to have to get creative and figure out what’s going on.