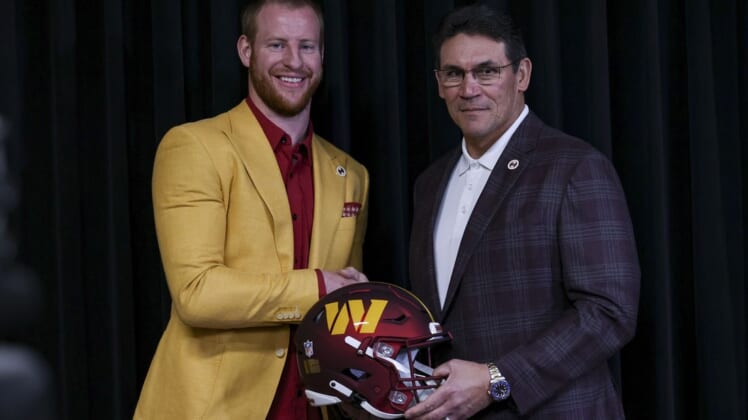 Very few NFL teams could acquire Carson Wentz at this stage of his career and consider their roster undeniably improved.

We give you the Washington Commanders, a team so bogged down in off-the-field controversy that it feels like they changed the name years ago. What remains of the Washington faithful will hope Wentz and the new nickname mark the dawn of a better era.

The highlight of Washington’s offseason came when the Commanders landed a much-needed deep threat in Jahan Dotson in the first round and Phidarian Mathis in the second. Dotson can stretch the field and Mathis can condense it for opposing offenses. Both should be immediate starters. In the NFC East, though, that’s not nearly enough. The Philadelphia Eagles got markedly better in the offseason.

It’s a similar story for the New York Giants, although it’s too much to expect a full turnaround coming overnight. Although the Dallas Cowboys mostly sat still in the offseason, they have most of their roster back after going 12-5 and winning the division last year.

The other NFC East teams either have taken steps forward or stood pat this offseason. With Wentz, the Commanders have taken a step back.

The Commanders benefit from a soft start to their schedule (Week 2 is a visit to the Lions). Trevor Lawrence and company come to town, newly unhindered by Urban Meyer but tasked with facing a daunting Washington front seven.

–YOUNG THE GIANT
It’s difficult for a defender to win Comeback Player of the Year, and the competition this season could include Derrick Henry, Christian McCaffrey, Michael Thomas and Jameis Winston. But returning from a torn ACL, Chase Young (+1400 at DraftKings) might be a worthy sleeper pick if he can bring back the terrorizing form he had in college and his rookie season.