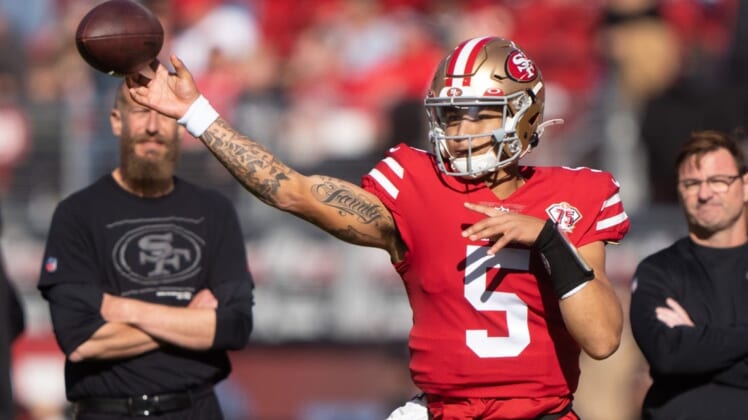 The San Francisco 49ers have made it to the NFC Championship in two of the past three seasons, but a dull offseason might just hamper their run of success.

There’s a lot of questions heading into the season regarding the quarterback situation, and San Francisco’s defense, which played a major role in its playoff success, is going to look a lot different.

Losing Laken Tomlinson and Tom Compton certainly hurts the 49ers’ offensive line, which is going to need to bring its A-game to protect Trey Lance in his first season as a full-time starter. Moving Jimmy Garoppolo was among San Francisco’s top priorities this offseason, and it has yet to do so. Does this mean Garoppolo has chance to win the starting role back? Or will he just sit on the bench all season no matter how Lance performs? It seems like the front office was a bit lackadaisical this summer, but at the same time, you have to wonder what more this team actually needs to get back to the Super Bowl.

Lance’s development is obviously going to be the top storyline throughout this season, but the defense’s ability to effectively respond to the losses it suffered over the past couple of months might actually be what makes or breaks this team.

Watching Justin Fields and Trey Lance duel it out in Week 1 is going to be a nice little preview of a potentially great future matchup, but it’s expected to be a low-scoring affair. San Francisco is the heavy favorite, a sensible lean considering it has the advantage in nearly every facet of the game.

–TRUST THE MAN IN CHARGE

With so many moving pieces on the defensive side of the ball and a young quarterback taking things over, if the 49ers do end up once again making a deep playoff run, head coach Kyle Shanahan is going to look like a genius. At +2000 odds (FanDuel), he could certainly be a sleeper to win Coach of the Year ($100 bet would net $2000 profit). Of course, things have to go well for his team for him to be in that conversation, but San Francisco has had a knack for exceeding expectations over the past few seasons.