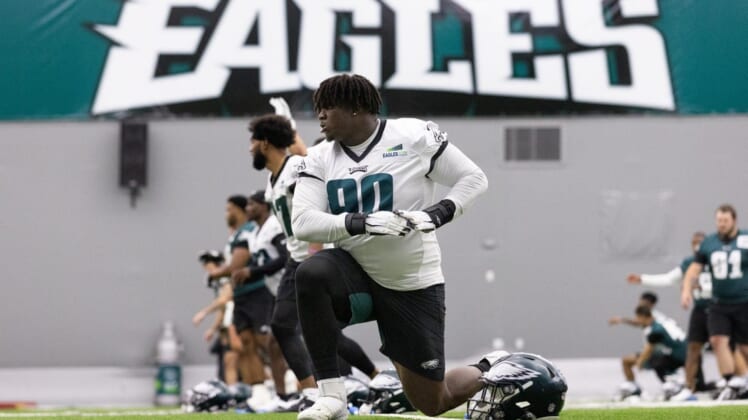 Last year’s wild-card berth was enough for the Philadelphia Eagles to commit to Jalen Hurts for at least another season and try to run it back with an assist from their relatively weak division.

The surprise trade for Titans receiver A.J. Brown seemed to solidify the Eagles’ offense. It’s now up to the defense not to show its age at certain positions.

Philadelphia entered the draft with two first-round picks and team president Howie Roseman was masterful on the first night of the draft. He landed Davis, who represents an upgrade over the only free agent to leave town (Hasaan Ridgeway). But he might have made a more important move with the second first-round pick he was dangling in front of the rest of the league.

Roseman was able to get a top-notch receiver when he made a trade with the Tennessee Titans for A.J. Brown. We’ll call the Eagles to top the Cowboys in the NFC East for now. If the Eagles can come up with decent secondary play (the one need that wasn’t addressed in the offseason), we could be talking about a lot more for Philadelphia.

The Eagles’ most lopsided win of 2021 came on the road against the Lions, a 44-6 drubbing in which the running game and defense in particular feasted. Detroit is scrappy, but might still reside on the bottom rungs of the league’s proverbial ladder in 2022.

Hurts ran in goal-line situations more than pretty much any quarterback last season, apart from Cam Newton’s brief return to the Panthers. His 10 rushing touchdowns were a window into what Hurts can do with regularity going forward, making DraftKings’ over/under of 8.5 rushing TDs (over at +100) so irresistible.