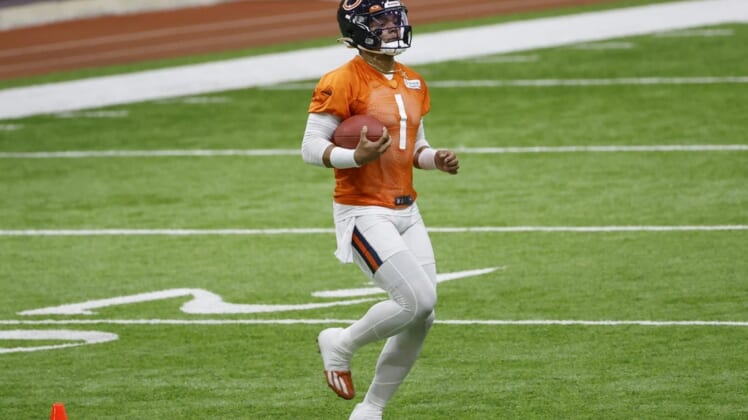 No longer a traveling band for training camp, the Chicago Bears kick off their summer practice sessions in the familiar comforts of Halas Hall with a bunch of unfamiliar faces.

First-time GM Ryan Poles hired Matt Eberflus to be a head coach for the first time after serving as defensive coordinator of the Indianapolis Colts, sweeping out the Ryan Pace and Matt Nagy era.

Poles didn’t stop there, cleaning house on the roster, too, by dealing away linebacker Khalil Mack, letting wide receiver Allen Robinson walk in free agency and tightening the pocketbook to plot for a brighter future in years ahead.

The Bears said goodbye to more talent than they brought in during the offseason, at least on paper. That is partly because new general manager Ryan Poles and head coach Matt Eberflus want to mold the team in their image, and the Bears are not in a position where it makes sense to carry a bunch of older, more expensive players. So the point of this offseason was to reshape an aging roster into a more athletic squad that also allows for more payroll flexibility in the coming seasons. Gordon and Brisker should get an early opportunity to contribute in the secondary as rookies, and Jones could be the face of a new-look defensive line in Eberflus’ 4-3 scheme. Harry is a former first-round pick with upside, but he couldn’t make an impact with the Patriots. Pringle and St. Brown have not traditionally put up big numbers, but they could get a chance to shine alongside Darnell Mooney now that Robinson is out of the mix. It is possible that some of the new additions could really pay off, but the Bears’ offseason focus did not seem to be on protecting Justin Fields as much as possible. Yes, there will be some new faces on the offensive line, but the lack of big-name signings and top draft picks could mean that Fields spends much of his second season like he did his first – hurrying throws and trying not to get sacked.

It could be a tough year for the Bears, who have a top talent at quarterback but need to support him with a better crop of offensive linemen and receivers

While the San Francisco Giants are chasing a playoff spot at Wrigley Field, the Bears open with the 49ers, who sledgehammered their way into the NFC Championship game but lost to the Rams. This could be the coming-out party for QB Trey Lance, while the Bears are hoping his 2021 draft first-round peer Justin Fields supplies some early magic.

PointsBet lists the Bears at +350 to make the playoffs despite active rebuilds around the NFC North. This one is worth a flier on the chance the Vikings and Lions aren’t ready for primetime. Chicago sits in a distant second tier of NFC teams but remember, nearly half of the league will be in the postseason. After playing the third-most difficult schedule in 2021, the Bears are not facing a daunting slate with the likes of the Texans, Jets, Giants, Commanders and Lions (twice).