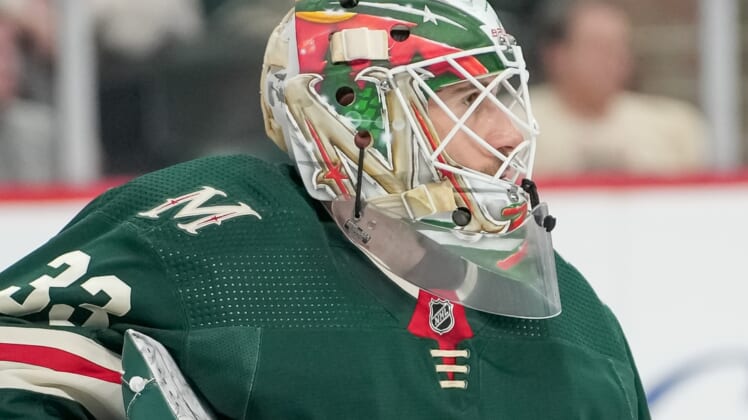 The addition of Marc-Andre Fleury raised the excitement level in and around the Minnesota Wild. However, the current play of teammate Cam Talbot is a big reason for his new team’s recent success.

Slated to be in goal, Talbot would seek a career-high-tying seventh straight winning start while trying to help the Wild win their fourth in a row Thursday night against the Vancouver Canucks in Saint Paul, Minn.

One of this year’s biggest trade-deadline moves was Minnesota’s acquisition of Fleury, the reigning Vezina Trophy winner with 511 career regular-season wins. The Wild sent the Chicago Blackhawks a conditional 2022 draft pick (either first round or second round) in exchange for the 37-year-old veteran.

Though Fleury was 19-21-5 with a 2.95 goals-against average as a Blackhawk this season, he moved into a much better situation with Minnesota.

Third in the Central Division, the Wild have won three in a row and are 5-1-1 after losing eight of 10. Meanwhile, Talbot has a 2.30 goals-against average during a winning streak that reached six games after he stopped all 28 shots on Monday in Minnesota’s 3-0 home win over the Vegas Golden Knights.

With Fleury still getting settled, Talbot is expected to start against Vancouver. Fleury could make his Wild debut against the visiting Columbus Blue Jackets on Saturday. Deciding between the two won’t be easy for coach Dean Evason, but it’s potentially a good problem.

“There’s a goaltender that’s not going to play on a given night,” said Evason, whose team owns a 10-3 goal edge during its three-game winning streak. “We expect everybody to be peeved off if they’re not in the lineup.

“If we’ve had anything here, we’ve had success because of our depth and because of the way our team approaches their teammates. And we don’t expect anything different.”

Back on Oct. 26, Talbot made 22 saves as the visiting Wild beat Vancouver for the third consecutive time and fifth in six meetings, 3-2.

Canucks coach Bruce Boudreau is set for his first game back in Minnesota, where he was in charge from 2016-17 until he was fired in February 2020. He went 158-110-35 with the Wild but didn’t win a playoff series in his three-plus seasons.

Vancouver, three points out of the final Western Conference wild-card spot, is 23-11-6 since Boudreau took over in early December.

“We’re playing every game as if it’s our last game,” Boudreau said. “The only people that think we’re done are the outside people.

“Just play it. If you have some success, then you’ll be where you want to be.”

The Canucks will aim to build on their 3-1 win over the Colorado Avalanche on Wednesday, a victory that snapped an 0-2-1 rut. J.T. Miller led the offense with a goal and an assist, giving him four goals and six assists during a six-game road point streak.

After Vancouver’s Jaroslav Halak made 32 saves on Wednesday, Thatcher Demko (2.68 goals-against average) is expected to start Thursday. Demko ranks ninth in the NHL this season with 27 wins, but he has a 3.14 GAA in nine March starts. He stopped 27 shots vs. Minnesota in October.

Minnesota’s Mats Zuccarello scored one of his 19 goals — during his career-high, 62-point season — against the Canucks in October. He will look to get going again after being held without a point on Monday for just the second time in nine games.