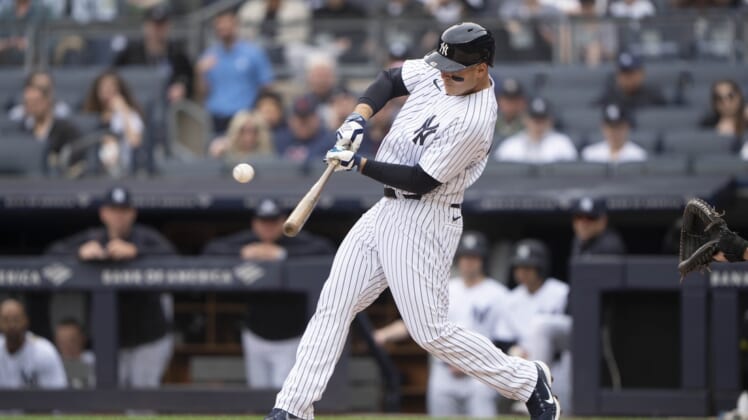 Isiah Kiner-Falefa hit a game-tying double off Emmanuel Clase, and pinch-hitter Gleyber Torres hit a game-winning RBI single with two outs in the ninth inning to give the host New York Yankees a 5-4 victory over the Cleveland Guardians on Saturday.

After Josh Donaldson opened the ninth with a walk, pinch-runner Tim Locastro stole second as Aaron Hicks struck out. After Joey Gallo lined out, Kiner-Falefa lifted a double over rookie left fielder Steven Kwan’s head in front of the video board to tie the game.

Batting for Kyle Higashioka, Torres won it when he lined a 1-2 slider from Clase (0-2) to the gap in right-center field, scoring Kiner-Falefa.

After Torres’ hit, fans sitting in the seats began throwing things onto the field. A few Yankees quickly raced to the area to tell fans to stop throwing things.

Before the ninth-inning comeback, Cleveland’s Austin Hedges hit a go-ahead, two-run homer with two outs in the eighth inning off Chad Green, but Miguel Castro (1-0) tossed a scoreless ninth.

Hedges, who entered the game hitting .103, gave Cleveland a 4-3 lead when he hammered a full-count fastball from Green into the left-field seats.

The blast occurred after Josh Donaldson gave the Yankees a 3-2 lead on a solo homer with one out in the seventh inning.

Donaldson hit his second homer as a Yankee when he hammered a 1-0 cutter from Cal Quantrill into Cleveland’s bullpen beyond the left-center-field fence.

Hedges’ homer spoiled a terrific outing by New York’s Nestor Cortes, who pitched 6 1/3 innings and allowed just Josh Naylor’s two-run homer with one out in the fifth.

Coming off a 12-strikeout performance Sunday in Baltimore, Cortes struck out eight and walked two in a 91-pitch outing. He struck out Kwan twice and also earned a standing ovation after retiring slugger Jose Ramirez to end his outing.

Kiner-Falefa hit an RBI single and Higashioka lifted a sacrifice fly in the fifth for New York to tie the score at 2.

Quantrill was activated off the COVID-19 injured list and allowed three runs on six hits in 6 1/3 innings for Cleveland.