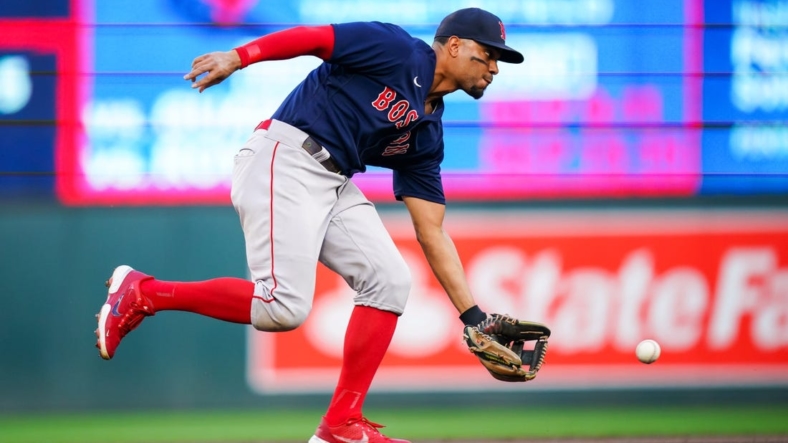 Gio Urshela hit a bases-clearing, two-strike double with two outs in the fifth inning as the host Minnesota Twins rallied from an early deficit and beat the Boston Red Sox 4-2 on Monday night.

The Twins won their fourth straight on the heels of a six-game skid that threatened to push them under .500.

Jake Cave drove in Minnesota’s first run with a sacrifice fly in the fourth off Boston rookie starter Brayan Bello (0-4) before Urshela came through against John Schreiber.

The Twins loaded the bases in the fifth by drawing two of their three walks against Bello. After Bello had walked Carlos Correa, Matt Strahm came in and got an out before walking Jose Miranda.

Urshela fouled off a sinker to reach a full count, but on the next pitch, the third baseman lined a slider to deep right for his 100th career double and a 4-2 lead.

Griffin Jax struck out two in the eighth after Trevor Story singled and stole second. Jorge Lopez needed nine pitches in a perfect ninth for his 23rd save and fourth with Minnesota.

Alex Verdugo and Reese McGuire hit RBI doubles as the Red Sox went 2-for-10 with runners in scoring position and lost for the eighth time in 11 games.

Minnesota’s Dylan Bundy allowed two runs on nine hits in 4 2/3 innings. He struck out three and walked one.

The Red Sox went ahead in the third when Tommy Pham singled and scored on Verdugo’s double to left that went over Cave’s head.

Boston took a 2-0 lead in the fourth when McGuire placed a double on the left field line to score Story. Bundy kept the deficit at two runs when he retired Pham and Verdugo but was lifted after allowing hits to Xander Bogaerts and Story in the following inning.