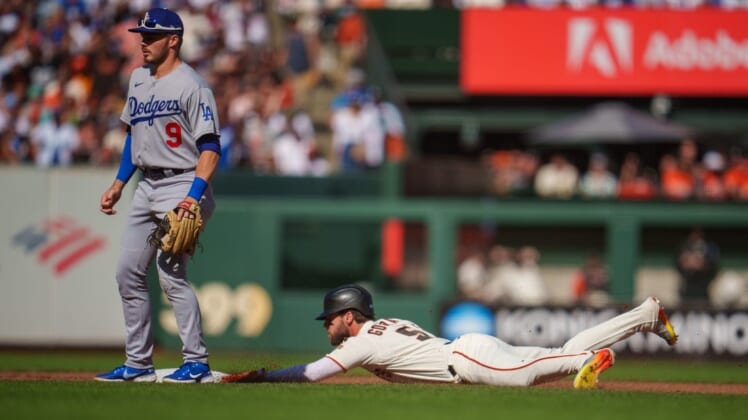 Thairo Estrada homered as the San Francisco Giants escaped two bases-loaded jams in the late innings and held on for a 3-2 win over the visiting Los Angeles Dodgers on Saturday.

San Francisco moved ahead 3-1 with an insurance run in the eighth before the Dodgers’ Freddie Freeman hit a leadoff homer in the ninth against Jose Alvarez.

With two runners on and two outs, Alvarez notched his first save of the season after Cody Bellinger grounded out to second base to end the game.

Dodgers starter Clayton Kershaw (4-1) returned from the injured list and allowed two runs on three hits over four innings. He had two walks and four strikeouts while throwing 71 pitches in his first start since May 7.

Trailing 2-0 in the seventh, the Dodgers loaded the bases with no outs. Jarlin Garcia replaced Zack Littell and struck out Freeman before inducing an inning-ending double-play from Trea Turner.

Los Angeles threatened again in the eighth. Bellinger delivered a run-scoring double against Garcia before Doval walked Chris Taylor to load the bases with one out. Doval then struck out Gavin Lux and Mookie Betts to end the inning.

Will Smith had three hits for the Dodgers, who lost for the fifth time in their last seven games.

The Giants took an early lead with two runs in the second against Kershaw. After Estrada belted a solo homer with one out, Brandon Crawford walked and Austin Wynns singled. Curt Casali struck out before Luis Gonzalez followed with an RBI single.

San Francisco added an insurance run in the eighth after loading the bases against Craig Kimbrel with no outs. Joc Pederson scored on a wild pitch before Kimbrel was replaced by Evan Phillips after striking out Crawford. Phillips then struck out Wynns and Casali to end the inning.

Wynns had two hits for the Giants, who won despite being outhit 13-5.

The Dodgers had a baserunner in all nine innings but were 2-for-10 with runners in scoring position and left 14 men on base.