Giants turn to Carlos Rodon to take series from Cubs 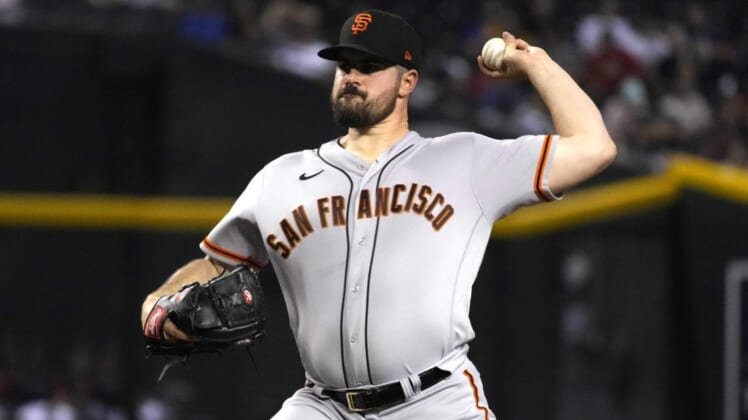 Carlos Rodon will get a chance to renew acquaintances with a former rival when the San Francisco Giants go for a third win in their four-game series against the visiting Chicago Cubs on Sunday night.

The rare four-night weekend series follows a split of a pair of 4-2 decisions and a 5-4 Giants win on Saturday in which the Cubs’ three-run ninth inning came up one tally short.

Rodon (8-6, 3.18 ERA) pitched seven seasons for the Chicago White Sox before joining the Giants as a free agent in March.

The 29-year-old lefty has made four starts among five career appearances against the Cubs, going 1-2 with a 4.74 ERA. Included in the starts was one in which he went the first five innings of a 4-0 win at Wrigley Field for the White Sox last August, an outing in which he struck out 11 and allowed just two hits.

Rodon is quite familiar with both Cubs catchers, Willson Contreras and Yan Gomes. Contreras homered off Rodon on the second pitch of their first meeting in 2017, while Gomes is 2-for-16 with two walks, a hit by pitcher and a sacrifice fly against the left-hander.

Contreras and Gomes were both in the lineup in Saturday’s loss, with Contreras serving as the designated hitter. He had two hits and an RBI, while Gomes singled and scored twice.

Rodon is winless in his last three starts, having served up 10 runs in 11 innings in his last two. He is coming off a 7-3 loss at Arizona on Tuesday in which he allowed two home runs and five total runs in six innings.

Rodon might get an opportunity to face the newest member of the Cubs, outfielder Zach McKinstry, who was acquired in a trade Saturday with the Los Angeles Dodgers. Chicago dealt reliever Chris Martin to the Giants’ National League West rival.

“We’re short left-handers, especially off the bench,” Cubs manager David Ross said of McKinstry, who has recorded a pair of doubles against the Giants in 20 lifetime at-bats against them. “There’s some matchups where we haven’t been able to maximize the splits of the opposing pitcher. (McKinstry will) give us another multi-faceted player that’s got a skill set in a lot of different spots.”

While several Cubs are familiar with Rodon, the Giants have no such advantage against Chicago’s announced starter, right-hander Adrian Sampson (0-1, 3.20). The five-year veteran has yet to face the Giants in his career.

Sampson has pitched effectively in his six starts this season, allowing three or fewer runs in five of them. The 30-year-old threw a season-best seven innings, allowing two runs, without getting a decision in a 3-2 home win over the Pittsburgh Pirates on Monday.

On a night on which the team retired Will Clark’s number, current prospect Joey Bart created a bit of Giants’ history Saturday with a 114.3-mph home run, the hardest hit homer by a Giant in the Statcast era (since 2015).

“That’s pretty cool,” he admitted afterward. “I don’t know if I’ve ever hit one that hard. Got a good pitch to hit.

“Ultimately, it was a good win. Kinda close there at the end, not really how we wanted to play it, but we got the job done.”