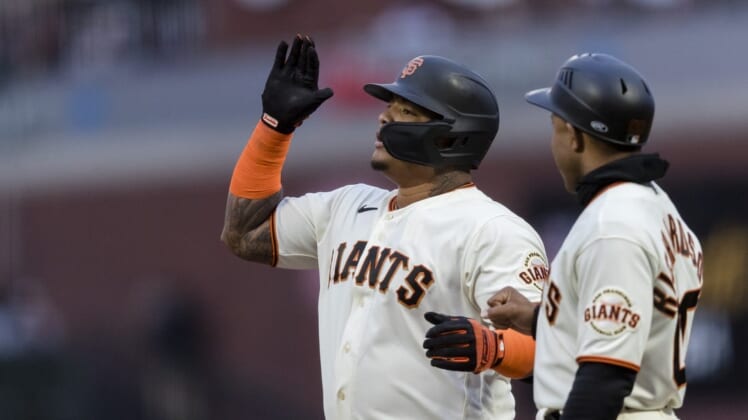 Left-hander Alex Wood took a no-hitter into the seventh inning and Yermin Mercedes contributed a two-run single to a three-run third as the San Francisco Giants snapped a season-worst, seven-game losing streak with a 4-2 victory over the visiting Chicago Cubs on Thursday.

Patrick Wisdom smacked a two-run homer for the Cubs, who saw a six-game winning streak come to an end.

Wood walked Christopher Morel and hit Willson Contreras to begin the game, but then didn’t allow another baserunner until Nelson Velazquez walked with one out in the sixth.

Wood (7-8) was pulled after Wisdom’s homer, charged with two runs and two hits in 6 2/3 innings. He walked two and struck out three.

Dominic Leone recorded the final out of the seventh, and John Brebbia threw a 1-2-3 eighth. Camilo Doval notched his 13th save by working around Happ’s second hit of the game, a one-out single, as the San Francisco closer struck out three in the ninth.

Mercedes’ big hit came with two outs in the third in a scoreless game. The single scored Mike Yastrzemski, who had reached on an error, and Austin Slater, who had singled off Cubs starter Justin Steele (4-7).

Thairo Estrada followed with an infield single that plated Wilmer Flores, who had been hit by a pitch, to make it 3-0.

The Giants added a run in the next inning after another Cubs error, this one on shortstop Nico Hoerner. Slater delivered David Villar with the run with a two-out double.

Mercedes, Slater and Estrada had two hits apiece for the Giants, who hadn’t won since taking three straight against the Milwaukee Brewers at home immediately prior to the All-Star break.

Steele lasted just 3 2/3 innings, although all four runs he allowed were unearned. He gave up five hits and a walk while striking out six.

The Cubs had gone 5-0 since the break. They were facing the Giants for the first time this season.