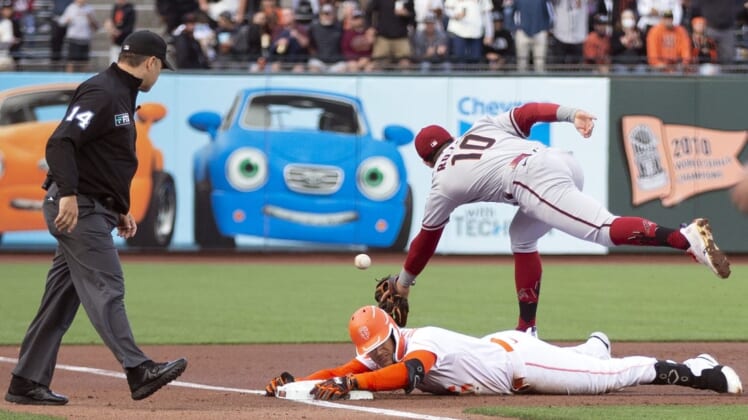 Bouncing back from a 4-3 defeat in the series opener Monday, the Giants jumped on Diamondbacks starter Dallas Keuchel (2-7) for four runs in the first inning and three more in the second en route to snapping a five-game home losing streak.

Mercedes opened the scoring with an RBI double in the first before rookie David Villar provided the big hit of the inning, a two-run triple on which he continued home on a throwing error by second baseman Sergio Alcantara.

The triple was the first of Villar’s career.

Bart and Mercedes hit their homers in the second. Bart’s fifth of the season was a solo effort, while Mercedes’ first as a Giant was a two-run blast that made it 7-0.

Estrada’s homers came in the third, a solo shot, and seventh, a two-run bomb, giving him a career-high nine for the season.

The two-homer game was the second of Estrada’s career. He connected twice off the Colorado Rockies’ Kyle Freeland last Sept. 6.

Keuchel was pulled two batters after Estrada’s first homer, charged with eight runs (seven earned) on eight hits in 2 1/3 innings. He walked one and struck out four.

An All-Star candidate who did not get his name called when the National League pitchers were announced Sunday, Webb (8-3) allowed five hits and two walks. He struck out eight while lowering his season ERA to 2.82.

Mercedes had a crack at a cycle in his last at-bat in the eighth. Facing Carson Kelly, normally a catcher, and needing a triple, he grounded out to second base, plating the Giants’ 13th and final run.

Austin Slater and Wilmer Flores also drove in runs in a three-run eighth against Kelly, who accomplished a 2022 rarity when, as the team’s pitcher, he came to the plate and singled in the ninth.

Mercedes finished with four RBIs, Estrada three and Villar two for the Giants, whose 13th runs equaled their second-most of the season. The Giants had a 15-6 victory over the Miami Marlins last month.

Mercedes and Slater collected three hits and three runs apiece, while Estrada and Bart both had two of each. Villar also contributed two hits to the 14-hit attack.

Alcantara had a double and two singles for Arizona, which has alternated losses and wins over its past five games.