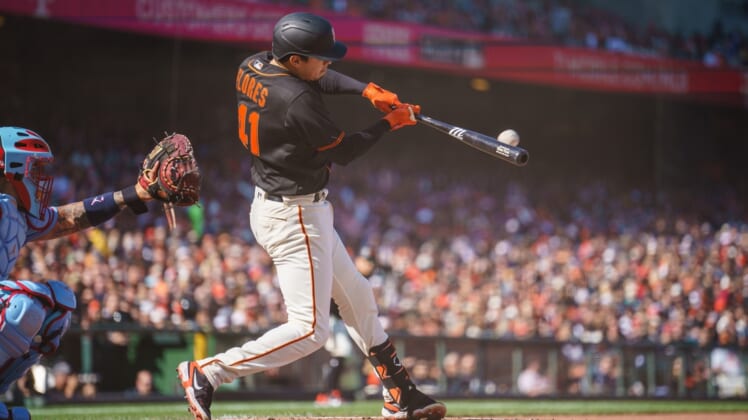 Wilmer Flores hit a grand slam and drove in six runs as the San Francisco Giants snapped their five-game losing streak with a 13-7 victory Saturday over the visiting St. Louis Cardinals.

Mauricio Dubon and Darin Ruf hit two-run homers for the Giants, who had scored just five runs in their previous four games.

San Francisco first baseman Brandon Belt suffered an injury swinging his bat in the eighth inning and exited the game.

Yadier Molina extended his hitting streak to eight games and got his 1,000th career RBI. He became the eighth primary big league catcher with 2,000 hits and 1,000 RBIs.

The Cardinals took a 1-0 first-inning lead on Nolan Arenado’s RBI single. In the bottom of the inning Flores hit his grand slam to put the Giants up 4-1.

St. Louis cut the lead to 4-3 in the second inning on RBI singles by Molina and DeJong. But in the bottom of the inning Dubon and Ruf hit two-run homers to make it 8-3.

The Cardinals got one run back in the fourth inning on DeJong’s second RBI single.

Errors helped the Giants push their lead to 9-4 in the bottom of the inning. Ruf hit a potential double-play grounder to shortstop that DeJong muffed, then Molina dropped a foul pop-up that led to Flores’ sacrifice fly.

The Cardinals cut the lead to 9-7 in the seventh inning on Carlson’s three-run homer. But the Giants responded in the bottom of the inning with Thairo Estrada’s RBI double.

The Giants pushed their lead to 13-7 in the eighth inning with four walks, a hit batter and Estrada’s sacrifice fly.