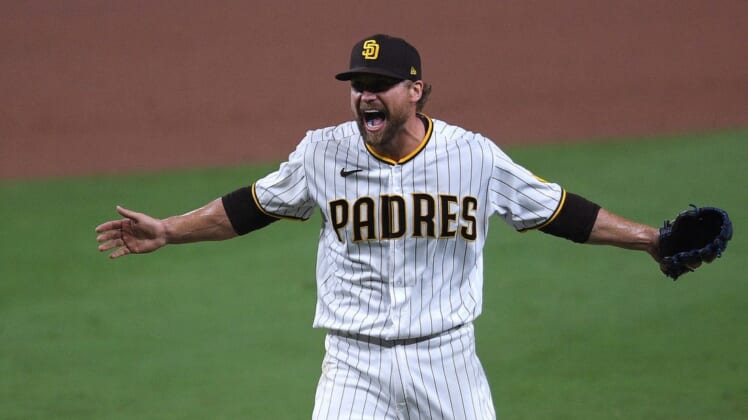 The San Francisco Giants signed former All-Star closer Trevor Rosenthal, who has not pitched in a major league game since 2020.

The team announced the deal Thursday, with multiple outlets reporting the agreement to be a one-year, $4.5 million prorated contract. Rosenthal also will have a chance to earn up to $2 million more based on the number of appearances and games finished.

The team immediately placed him on the 15-day injured list with a strained left hamstring, and manager Gabe Kapler said the right-hander remains “several weeks away” from potentially being ready to pitch for the Giants.

Rosenthal, 32, was one of baseball’s most feared closers before being plagued by injuries and inconsistency over the last half-decade. Originally a 21st-round pick by the St. Louis Cardinals in 2009, he burst onto the big-league scene in 2012, often throwing 100 mph fastballs out of the bullpen.

In his first full season in 2013, Rosenthal ranked third among relievers with 108 strikeouts and earned his first three saves as the Cardinals eventually won the World Series. By 2014, he was closing games for St. Louis and ranked fourth with 45 saves, then topped it by notching a club-record 48 (second in the majors) in his lone All-Star campaign in 2015.

Rosenthal had bouts with lack of control in 2016, when he was moved in and out of the closer role and his ERA jumped to 4.46 from 2.10 the previous season. In 2017, he regained the job later in the season but then suffered a right elbow injury that required Tommy John surgery, sidelining him until 2019.

The Cardinals released Rosenthal in November 2017 and he spent the 2019-20 seasons with five franchises — Washington, Detroit and the New York Yankees (minor league contract) in 2019, Kansas City and San Diego in 2020.

The veteran signed with Oakland before the 2021 season, but he never pitched after surgeries to repair thoracic outlet syndrome and a torn labrum in his hip. In parts of eight seasons of action, Rosenthal is 12-25 with a 3.36 ERA in 373 outings, all in relief.

Right-hander Mauricio Llovera (flexor strain) was shifted to the Giants’ 60-day IL to make room for Rosenthal on the 40-man roster.