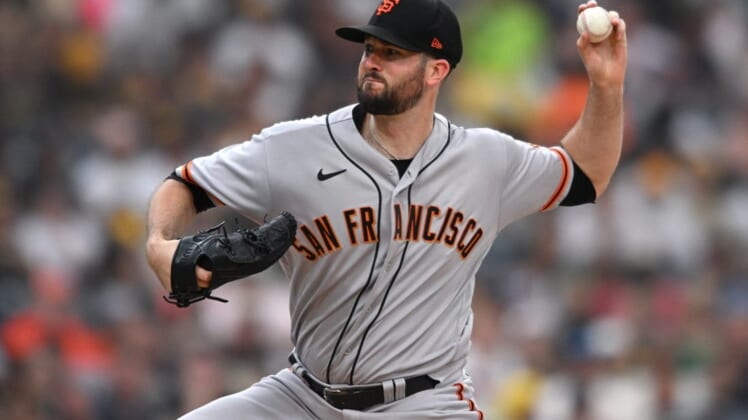 The San Francisco Giants have an opportunity to complete their first home sweep in more than two months when they host the Pittsburgh Pirates on Sunday.

The Giants have made the most of just 11 total hits to record 5-3 and 2-0 wins in the first two contests of the three-game set.

Having gone just 2-6, 5-2 and 3-5 in their past three homestands, the Giants will go for their first sweep of a series at home since dispatching of the rival Los Angeles Dodgers in three straight from June 10-12.

The 31-year-old has alternated losses and wins in his past four starts, the most recent being a 1-0 victory at San Diego on Monday in which he threw 6 1/3 innings of shutout ball.

The Giants made things easier on Saturday’s starter Logan Webb by scoring a run two batters into the bottom of the first inning. LaMonte Wade Jr. got it going with a double, then added a solo homer two innings later.

Wade has three homers in his past five starts after totaling just three in his first 25 starts this season.

“When he gets on a roll, he can get hot with the best of them,” Giants manager Gabe Kapler insisted after Tuesday’s win. “Ultimately, a confident LaMonte Wade Jr. is a productive LaMonte Wade Jr., and one that can carry us for a while.”

The runs came on solo homers by Luis Gonzalez and Joc Pederson. It was his only career appearance against the Giants.

Despite losing a key reliever for the season on the eve of the series, the Pirates have seen their bullpen fare well in the losses.

Following starters who permitted a combined six runs on nine hits in 8 1/3 innings, six different relievers have combined for 7 2/3 innings of one-run, two-hit ball. Those strong performances allowed the visitors a chance after they’d fallen behind 3-0 and 2-0 in the first three innings.

One of the club’s most dependable relievers, Yerry De Los Santos, has not been one of the six summoned from the bullpen. He experienced discomfort in his right shoulder in an outing Thursday in Arizona, after which an MRI revealed a lat strain.

The Pirates announced Saturday he is done for the season, ending a rookie year in which he didn’t allow an earned run in 18 of his 26 appearances.

“These are things that I’m going to take with me going into the offseason,” De Los Santos said. “Get healthy, get better and come back next season fully healthy and ready to help this team win.”