Giants, Seahawks square off in battle of biggest surprises 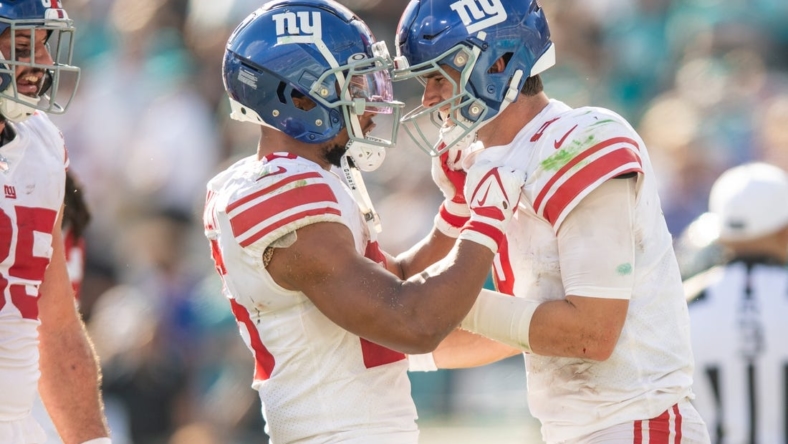 Headlines in New York and Seattle this week have included words like “validation” and “silencing doubters.”

The Giants (6-1) and Seahawks (4-3), two of the most surprising teams in the first half of the NFL season, will look to remain on that path when they meet Sunday afternoon in Seattle. The game marks the league’s only Week 8 matchup between teams that both have winning records.

New York is a half-game behind NFC East-leading Philadelphia and is the first team in league history to start 6-1 or better with each of its first seven games decided by one possession.

The Giants won 23-17 at Jacksonville last weekend as safeties Julian Love and Xavier McKinney stopped Jaguars receiver Christian Kirk at the 1-yard line on the game’s final play. Saquon Barkley and quarterback Daniel Jones each rushed for more than 100 yards.

“I’m never really happy,” first-year Giants coach Brian Daboll said. “It’s always on to the next week. I’m glad we won. But like I say every week: There’s certain things to clean up. This week is no exception.”

Veteran defensive tackle Leonard Williams said the Giants can’t keep allowing opponents to stay in the game until late in the fourth quarter.

“It’s not good enough,” Williams said. “We’re not doing a good enough job of putting our foot on the gas and finishing the game, where we can have a comfortable win.

“Even though we pride ourselves on taking teams into the deep end (in the fourth quarter) and winning in those situations, I think we need to get out of the habit of coming down to those close games.”

The Seahawks are atop the NFC West, a half-game ahead of the defending Super Bowl champion Los Angeles Rams.

Geno Smith, who took over after Russell Wilson was traded to Denver in the offseason, leads the league with a 73.5 completion percentage. He’s third in quarterback rating (107.7), behind only Kansas City’s Patrick Mahomes (109.5) and Buffalo’s Josh Allen (109.1).

With running back Rashaad Penny out for the season after ankle surgery, rookie Kenneth Walker III has stepped up.

Walker rushed for 167 yards and two touchdowns — including a clinching 74-yarder in the fourth quarter — in a 37-23 victory against the host Los Angeles Chargers last Sunday, the Seahawks’ first victory against a team with a winning record.

Smith completed 20 of 27 passes for 210 yards and two touchdowns, his fifth multi-TD game of the season. Marquise Goodwin, filling in after DK Metcalf went down with a knee injury late in the first quarter, made a pair of TD receptions.

Seahawks coach Pete Carroll was unaware his team was in first place when he met with his players in the locker room following Sunday’s victory.

“I would have been going nuts about that. That’s fun, too. That’s good,” Carroll said. “Seven weeks in and look where we are. Who would have thunk it?”