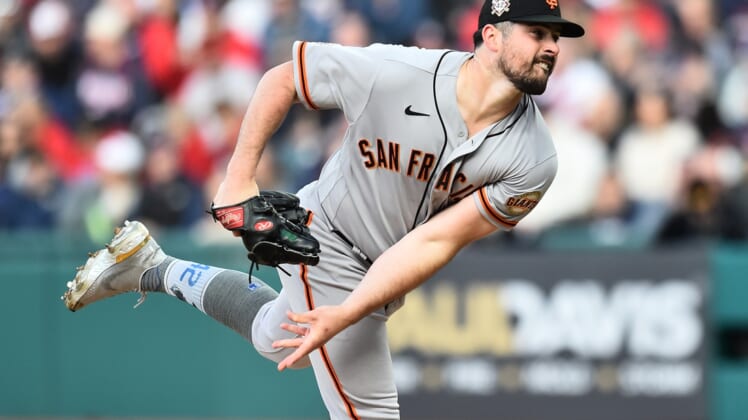 The Giants prevailed in their first visit to Cleveland since 2008. The Guardians lost while playing in Cleveland under their new name for the first time.

Rodon (1-0), who pitched a no-hitter against Cleveland last season while a member of the Chicago White Sox, allowed just one run and two hits in seven innings this time around. He walked two and struck out nine.

Signed as a free agent over the winter, the left-hander has given up just two runs and five hits in his first 12 innings for the Giants.

Rodon worked with a lead after Crawford and Pederson smacked solo shots in the second and sixth innings, respectively, off Guardians starter Zach Plesac (0-1). The homers were the first of the season for Crawford, the second for Pederson.

Plesac was pulled two batters after Pederson’s long ball, charged with two runs on seven hits in 5 1/3 innings. He walked one and struck out four.

The Guardians got back within 2-1 in the seventh on a walk, a single by Franmil Reyes and a sacrifice fly by Owen Miller. However, Rodon struck out Josh Naylor with his last of 90 pitches to retain the lead.

Bart provided the San Francisco bullpen with some breathing room when he barely cleared the wall in left field with a two-run shot in the eighth, scoring Thairo Estrada, who had reached base on an error. Bart’s homer was his second of the year.

The three-homer game was the Giants’ third of the season. They didn’t hit any homers in their other four games.

San Francisco reliever Tyler Rogers pitched a 1-2-3 eighth before Camilo Doval worked around a one-out double by Jose Ramirez in the ninth to record his second save.

Pederson and Bart added a single apiece as they combined for half of the Giants’ eight hits in the club’s third straight win.

Miller joined Ramirez with a double for the Guardians, who totaled just three hits while watching their four-game winning streak come to an end.