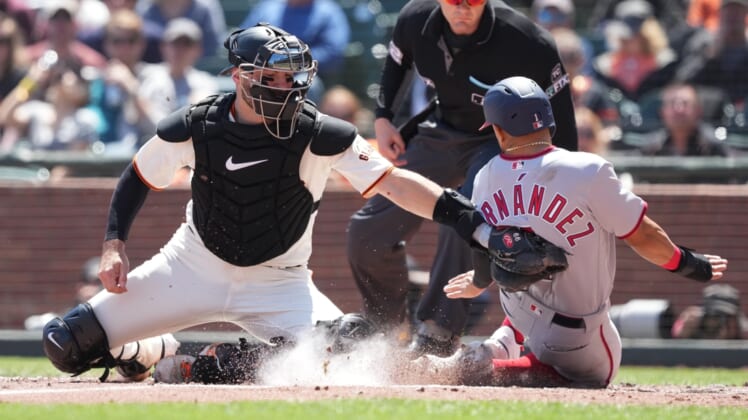 Jason Vosler bombed a home run into the San Francisco Bay as the San Francisco Giants avenged a blowout loss in the series opener with a 9-3 triumph over the visiting Washington Nationals on Saturday afternoon.

Thairo Estrada drove in three runs for the Giants.

Logan Webb (3-1) worked around 11 hits in six innings and an early 2-0 deficit to beat the Nationals for the second time in seven days. He was charged with three runs, walking one and striking out three.

He posted similar numbers in a 12-3 win at Washington last Sunday, allowing three runs and seven hits in 6 2/3 innings.

After a walk and consecutive doubles by Alcides Escobar and Cesar Hernandez had given the Nationals a 2-0 lead in the third, Estrada got San Francisco even with a two-RBI double in the bottom of the inning.

The Giants dominated from there, taking the lead for good with two runs in the fifth and making it a one-sided affair with four more in the sixth.

Vosler’s homer, his second of the season, came leading off the sixth after the Nationals had climbed within 4-3.

That damage was done against the Washington bullpen after starter Joan Adon (1-4) had worked the first four innings, charged with four runs on four hits. He walked three and struck out five.

Vosler capped a two-RBI day with a sacrifice fly that plated the game’s final run in the seventh.

Ruf finished with three hits and Vosler two for the Giants, who snapped a two-game losing streak. Crawford and Luis Gonzalez scored twice each for San Francisco.

Escobar, Josh Bell, Yadiel Hernandez and Victor Robles had two hits apiece for the Nationals, who lost for the ninth time in their last 10 games despite matching the Giants in hits with 11 apiece.