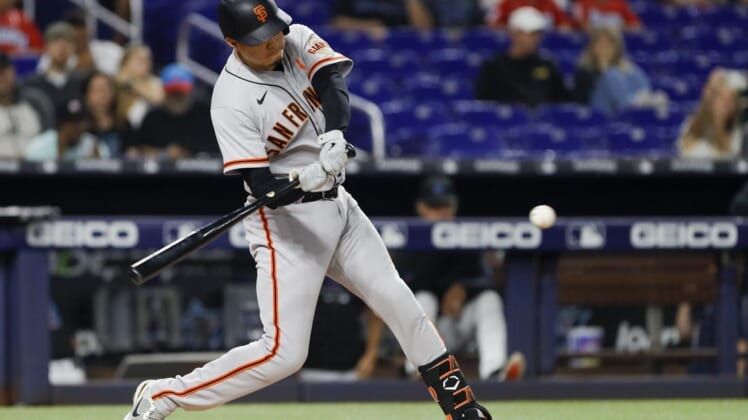 Mike Yastrzemski and Brandon Crawford drove in five runs each, leading the San Francisco Giants past the host Miami Marlins 15-6 on Friday night.

Yastrzemski slugged a three-run homer in the second and added a two-run double off the right-field wall in the seventh. Crawford had an RBI groundout in the first and a grand slam as part of San Francisco’s six-run seventh.

Joc Pederson and Jason Vosler added solo homers, and Thairo Estrada had a two-run dinger as the Giants snapped a two-game losing streak. It was Pederson’s 13th homer of the season, placing him among the National League leaders.

Giants right fielder Luis Gonzalez left the game in the second inning after he was hit by a pitch on his right leg. He is the fifth Giants outfielder out, including Steven Duggar (oblique), Austin Slater (left wrist), LaMonte Wade Jr. (left knee) and Darin Ruf (bereavement).

Cobb was scratched due to lower-back tightness. John Brebbia, who started in place of Cobb, pitched one scoreless inning. Sean Hjelle, who is one of the tallest pitchers in major-league history at 6-foot-11, followed Brebbia and allowed two runs in three innings.

Giants right-hander Zack Littell (1-1) got the win after pitching two winnings of scoreless relief. He struck out four.

Marlins manager Don Mattingly said he wanted to “switch it up”, benching Elieser Hernandez in place of Richard Bleier, who made his second career start and his first since 2019 when he was with the Baltimore Orioles.

Bleier (0-1) lasted just one inning, allowing one hit, one walk and one run. Hernandez followed Bleier, allowing eight runs in 4 1/3 innings. Hernandez allowed four homers and has given up 18 dingers in 11 games this season.

San Francisco opened the scoring in the first as Wilmer Flores singled, advanced on Yastrzemski’s walk, went to third on Evan Longoria’s fly out and scored on Crawford’s groundout.

The Giants made it 5-0 in the second as Flores pulled an RBI double down the left-field line, and Yastrzemski followed with his 397-foot homer on a 3-2 slider off of Hernandez.

But the Giants put the game away with homers from Estrada (fifth inning) and Vosler (sixth), stretching their lead to 9-2. The Giants rolled from there.