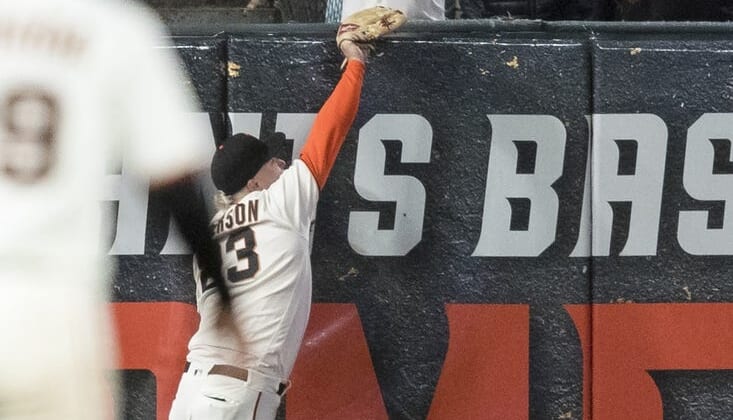 The San Francisco Giants placed All-Star outfielder Joc Pederson on the seven-day concussion list prior to Friday night’s game against the Chicago Cubs.

Pederson was injured one night earlier when he banged his head into the left-field wall in the seventh inning while trying to catch a two-run homer by Patrick Wisdom of the Cubs.

Pederson appeared dazed in left field after the collision and was removed from the game.

“Right when I ran into the wall, my head instantly started hurting,” Pederson said on Friday. “Then I got a headache, so I kind of knew something was up.”

Pederson said this in his second career concussion. He sustained one in 2017 as a member of the Los Angeles Dodgers when he collided in the outfield with Yasiel Puig.

Giants manager Gabe Kapler the club will play close attention to Pederson over the coming days.

“Any time you have multiple concussions over any period of time, I think you begin to take them more and more seriously,” Kapler said before Friday’s game. “This doesn’t mean that we have any specific long-term concerns for Joc.”

The 30-year-old Pederson is batting .242 with 17 homers and 43 RBIs in 87 games. He was on the National League All-Star team earlier this month for the second time in his nine-year career.

San Francisco recalled infielder Jason Vosler from Triple-A Sacramento in a corresponding move. Vosler, 28, batted .268 with four homers and eight RBIs in 19 games with the Giants earlier this season.