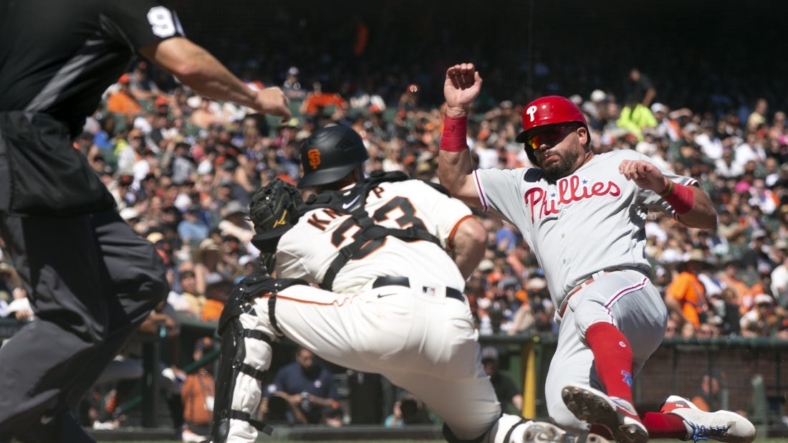 Joc Pederson continued his RBI rampage with three more and the San Francisco Giants made it two straight wins over the visiting Philadelphia Phillies on Saturday afternoon with a 5-4 victory.

LaMonte Wade Jr. had two hits and scored twice while Camilo Doval nailed down his 19th save of the season, lifting the Giants to within nine games of the Phillies in the National League wild-card race.

After two lead changes and four ties, the Giants scored what proved to be the difference-making run when Pederson drew a two-out bases-loaded walk from Brad Hand (3-2) for a 5-4 lead in the sixth.

The San Francisco bullpen took over from there, stranding the potential tying run at third base in both the seventh and eighth innings. Doval recorded the final out of the eighth, striking out Matt Vierling with Bryson Stott on third en route to his four-out save.

Zack Littell (2-2), who threw just two pitches to get the final out of the sixth inning, was credited with the win.

Pederson drove in a pair of runs with hits earlier in the game, one with a single that made it 2-2 in the third, the other with a single that gave the Giants a 4-3 lead in the fifth. The three RBIs gave Pederson 13 in his last five games, tying him for the team season lead with Wilmer Flores at 61.

A throwing error by Phillies starter Noah Syndergaard in the first inning and a fielding miscue by first baseman Rhys Hoskins in the third produced the Giants’ other two runs.

Syndergaard was pulled one out into the fifth, charged with four runs (three earned) on seven hits. He walked one and struck out three.

Stott and Jean Segura had big games for the Phillies, Stott with a homer, two singles and three runs, Segura with two doubles, a single and two RBIs.

Stott’s homer, his ninth of the season, came leading off the fourth inning off Giants starter Jakob Junis and drew the Phillies even at 3-3.

Vierling had Philadelphia’s other RBI on a second-inning single.

Kyle Schwarber collected a double and a triple for the Phillies, who out-hit the Giants 12-11 but went just 3-for-15 with runners in scoring position.