Giants need 10 innings to pull off victory over Marlins 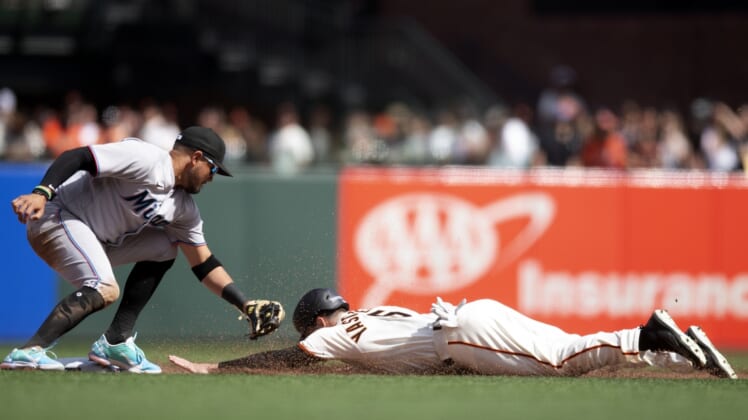 Austin Slater stroked a two-out, game-ending double in the 10th inning, leading the host San Francisco Giants to a 6-5 season-opening win over the Miami Marlins on Friday afternoon.

Slater’s hit off reliever Anthony Bass drove in Darin Ruf, who was on first base after a walk.

Joey Bart, Brandon Belt and Thairo Estrada homered for the Giants, and right-hander Logan Webb held the Marlins scoreless into the into the seventh inning.

Miami’s Jazz Chisholm Jr. hit a two-run, go-ahead homer in the top of the ninth inning, giving Miami a 5-4 lead. He hit his blast off Giants closer Camilo Doval, who allowed three runs in the ninth.

But Estrada homered off Marlins right-hander Anthony Bender to lead off the bottom of the ninth, sending the game to extra innings.

Jacob Stallings, Miami’s newly acquired Gold Glove-winning catcher, delivered a two-run homer and an RBI single. He also picked off Ruf in the second inning and threw out Mike Yastrzemski in the fifth.

It was the first Opening Day start for Bart and for Webb, who are both 25. Bart, who replaced retired Giants legend Buster Posey at catcher, went 1-for-3 with a walk, two runs and the homer.

Webb allowed just five hits, but he walked the Marlins’ Joey Wendle to lead off the seventh and was removed. Stallings then pulled a two-run homer off reliever Dominic Leone to get Miami within 3-2.

San Francisco opened the scoring with two runs in the third on RBI singles from Belt and Ruf. Both RBI hits in the inning went away from the shift.

On a day where catchers shined, Bart’s homer in the fifth extended San Francisco’s lead to 3-0, and Stallings’ blast in the seventh cut Miami’s deficit to 3-2.

Belt, who had a career-high 29 home runs last year, hit a solo shot in the eighth to extend the Giants’ lead to 4-2.

In the ninth, Stallings – who went 2-for-4 with all three of Miami’s RBIs – drove in Rojas from second with a soft single to center. Chisholm followed with his tying homer.

Jose Alvarez earned the win by getting the last out in the top of the. 10th.