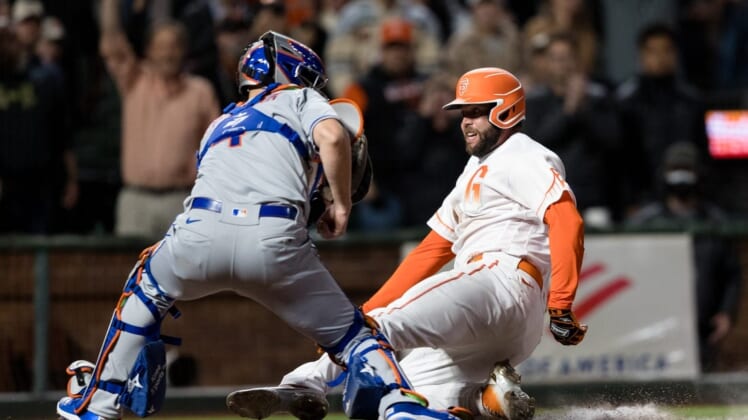 The San Francisco Giants and New York Mets won’t have much time to figure out how to produce an encore to the most entertaining and chaotic game of the major league season.

The Giants and Mets will each be operating on little rest while trying to earn a series win Wednesday afternoon, when San Francisco is slated to host New York in the final regular-season meeting between the teams.

Right-hander Jakob Junis (1-1, 2.70 ERA) is scheduled to start for the Giants against left-hander Thomas Szapucki, who will be recalled from Triple-A Syracuse to make his season debut for the Mets.

The Giants won in wild fashion Tuesday night, when they blew a six-run, seventh-inning lead but overcame a three-run, eighth-inning deficit and a one-run deficit in the ninth.

San Francisco’s Joc Pederson hit three homers and knocked in the tying run in the bottom of the ninth with a two-out single. Brandon Crawford followed with a walk-off single to lift the Giants to a 13-12 win.

“Great game for fans,” Mets manager Buck Showalter said. “(To) see people operating at that level — both teams, see how much that both teams wanted to win.”

“It’s 11:07 — come back, turn the page in a couple minutes, come back tomorrow and do it again,” said Mets shortstop Francisco Lindor, who began the comeback with a two-run homer in the seventh and gave New York the lead with a three-run triple during a seven-run eighth.

It was the second seven-run inning of the season for the Mets, who almost won a game in which they trailed by six runs for the second time. New York stunned the Philadelphia Phillies by scoring seven runs in the ninth inning of an 8-7 win on May 5.

Lindor finished with six RBIs — two fewer than Pederson, who set single-game career highs for homers and RBIs. Pederson’s third long ball of the night, a three-run shot, tied the score in the bottom of the eighth.

Pederson and Lindor are the first players from opposing teams to finish with at least six RBIs in the same game since the Arizona Diamondbacks’ Paul Goldschmidt and Chicago Cubs’ Willson Contreras did it on Aug. 3, 2017.

Pederson, the 22nd Giants player to hit at least three homers in a game, entered Tuesday hitting .229 with seven homers and 14 RBIs in 33 games this year. He credited a pregame talk with Giants adviser Barry Bonds — whose four three-homer games are the most in franchise history — for his breakout performance.

“It just freed my mind up — the way he talks about hitting, just helped me out a little bit,” Pederson told NBC Sports Bay Area immediately after the game. “Still kind of speechless processing it all, I guess.”

Junis didn’t factor into the decision on Friday, when he gave up four runs over six innings in the Giants’ 8-7, 10-inning loss to the San Diego Padres. He took the defeat in his lone appearance against the Mets on Aug. 17, 2019, when with the Kansas City Royals Junis allowed three runs over 6 1/3 innings in a 4-1 loss.

Szapucki, who was 0-3 with a 2.86 ERA in seven starts for Syracuse, will be making his second big league appearance and first start. He gave up six runs in 3 2/3 innings of relief in the Mets’ 20-2 loss to the Atlanta Braves last June 30.