Giants looking past injuries with Texans next 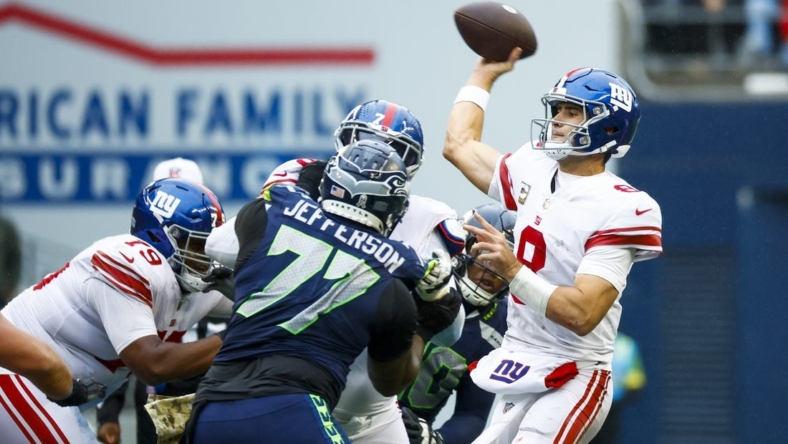 Beyond the surprisingly positive results, the first half of the season was relatively pristine for the New York Giants. That was before the bye week brought with it an unfortunate injury revelation.

The Giants (6-2), set to face visiting the Houston Texans (1-6-1) on Sunday in East Rutherford, N.J., placed safety Xavier McKinney on the reserve/non-football injury list after McKinney suffered a hand injury in an ATV accident while on vacation. One of five Giants to start all eight games on defense, McKinney ranks fourth on the team with 38 tackles and has four passes defended and a forced fumble.

The loss of McKinney for several weeks not only impacts the Giants statistically, but it also alters roles on their defense. Safety Julian Love will assume the responsibility of relaying the plays on the field while Dane Belton and Jason Pinnock step into the void with McKinney sidelined.

Giants coach Brian Daboll sidestepped any revelation of whether McKinney was disciplined for his actions, and was curt in assessing how the Giants would move forward in his absence.

“I feel bad for Xavier. Disappointed that he got injured,” Daboll said. “And he’ll do everything he can do to get back and be ready to go.

“I feel bad for him, I feel bad for us. I know he’s disappointed. But can’t do anything about that now. We’ll get ready to play Houston.”

Even without McKinney, the Giants are well-positioned to keep pace in a competitive NFC East.

The Giants were without tight end Daniel Bellinger (eye) and tackle Evan Neal (knee) at practice on Wednesday. However, Daboll said the Giants were “moving in the right direction” with the likes of cornerback Cor’Dale Flott (calf), receiver Kenny Golladay (knee) and linebacker Oshane Ximines (quad), all of whom should provide a boost against a scuffling opponent in Houston.

The Giants have won four consecutive meetings against the Texans.

Quarterback Daniel Jones has posted a 90-plus passer rating in three of his past four starts while amassing five touchdowns (three passing, two rushing) in four home games this season. Saquon Barkley ranks second among all running backs, averaging 121 scrimmage yards, including seven games with 85-plus scrimmage yards.

The Texans remain without receiver Brandin Cooks while rookie running back Dameon Pierce, their lone bright spot offensively with 678 yards and three rushing touchdowns, was a limited participant on Wednesday with a chest/shoulder injury.

Defensive lineman Maliek Collins (chest) and receiver Nico Collins (groin) appear to be on the mend, but the Texans are 0-3 since emerging from their bye with an average margin of defeat of 12.3 points.

“To get them back, of course, is big, two guys that we depend on,” Texans coach Lovie Smith said. “Maliek Collins, it all kind of starts with, most defenses, interior guys, the closest ones to the quarterback. To be able to get Maliek back is big for us. We missed him an awful lot. We’re starting that process. He was limited (Wednesday), but he’s getting closer to playing.

“Nico Collins, one of our best players too, big, good target, that has to help. Eventually, getting both of those guys back in the mix will help our team a lot, absolutely.”