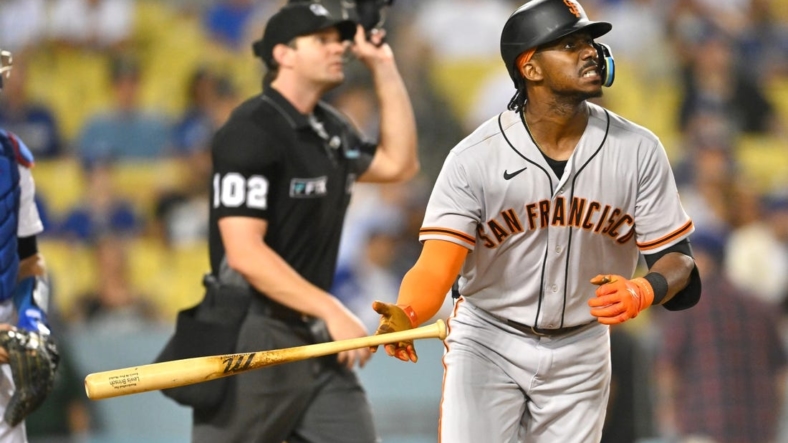 Having beaten the Los Angeles Dodgers for the first time in almost three months, the visiting San Francisco Giants will attempt to make it two wins in a row when the National League West rivals meet again on Tuesday night.

Three players who weren’t with the Giants the last time they beat the Dodgers, on June 12 — Lewis Brinson, J.D. Davis and David Villar — combined for four of the team’s five home runs in a 7-4 triumph Monday in the opener of a three-game series.

The Giants have used a four-game winning streak to remain on the periphery of contention for the NL’s final two wild-card spots. They begin play Tuesday 7 1/2 games behind the Philadelphia Phillies and San Diego Padres in a five-team duel that includes the Milwaukee Brewers and Arizona Diamondbacks.

The Diamondbacks beat the Padres 5-0 on Monday to tighten the gap.

In snapping an eight-game losing streak to the Dodgers, the Giants did all of their scoring in the series opener on home runs, including one by Thairo Estrada. Brinson hit two homers.

All five San Francisco homers came off left-handers, and the visitors will see another when Tyler Anderson (13-3, 2.68 ERA) makes his expected start for the Dodgers.

The Giants are quite familiar with Anderson, who went 4-3 with a 4.37 ERA for them in 2020 before leaving as a free agent to Pittsburgh.

After opening the season 13-1, Anderson has gone winless in his last four starts despite allowing just seven runs in 25 1/3 innings.

The Giants expect to add a right-handed bat to the lineup against Anderson, with catcher Joey Bart having been cleared to return from a concussion. Bart hit a two-run homer off Anderson the last time the veteran started against San Francisco in August.

Giants manager Gabe Kapler has elected to use Tuesday as a bullpen day to fill in for lefty Alex Wood, who was placed on the 15-day injured list with pain in his left shoulder after allowing four runs in 4 2/3 innings in a 5-4 home loss to the Padres last Wednesday.

The Giants didn’t issue a walk on Tuesday, which Kapler said will be key moving forward.

“If you give up home runs to the tougher part of their lineup, it’s not that big of a deal,” Kapler noted of homers hit by Freddie Freeman and Austin Barnes. “It’s the walks that generate the (big innings). We did a good job keeping them off the basepaths via the walks.”

The Padres’ loss Monday allowed the Dodgers to lower their magic number for clinching the NL West title to eight.

Catcher Will Smith said the focus is on winning the division rather than the loftier goals of finishing with the best record in the National League. The Dodgers (92-42) lead the New York Mets by 7 1/2 games for the league’s top mark and have a shot to break the franchise record of 106 wins in a season.

“You definitely want to win the division,” Smith assured. “It gives you a little bit of an easier road in the postseason.”