Giants get off to fast start in victory over Mets 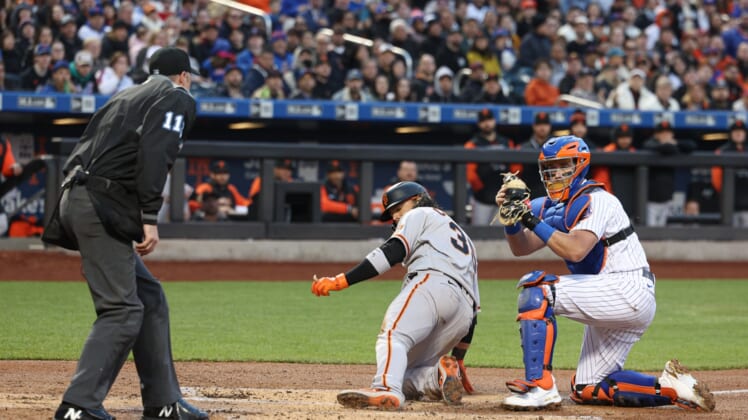 Brandon Belt, celebrating his 34th birthday, homered in the second and Mike Yastrzemski added an RBI single in the fourth for the Giants, who were swept in Tuesday’s doubleheader.

The loss snapped a three-game winning streak for the Mets, who played without manager Buck Showalter after he underwent a medical procedure Wednesday. The club was managed by a committee of coaches.

Rodon (2-0) allowed three hits and two walks while striking out eight. His 29 strikeouts are the most by a Giants pitcher in his first three starts with the club since 1901.

The Mets collected six hits and two walks against a quartet of relievers — John Brebbia, Dominic Leone, Trevor Rogers and Jake McGee — but scored just single runs in the seventh and eighth on RBI singles by Starling Marte and Mark Canha. Rogers got pinch-hitter Dominic Smith, the potential tying run, to line out to Flores to end the eighth.

McGee worked around a leadoff walk in the ninth to earn his second save.

The Giants scored all the runs they’d need in the first against Chris Bassitt (2-1). Mike Yastrzemski led off with a single and Belt popped out before Darin Ruf drew a walk. Pederson doubled home Yastrzemski and Crawford and Flores followed with their run-scoring singles.

Pete Alonso went 3-for-4 while Brandon Nimmo and Eduardo Escobar had two hits apiece for the Mets.

Bassitt, who gave up one run over 12 innings in his first two starts, allowed the five runs on eight hits and one walk while striking out six over five innings.