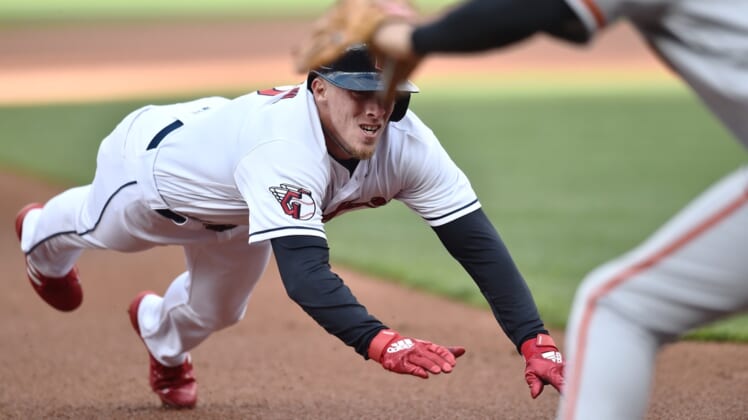 The San Francisco Giants pushed across two runs in the eighth inning to defeat the host Cleveland Guardians 4-2 on Saturday.

Wilmer Flores smashed a ball up the middle with one out and the bases loaded. Second baseman Ernie Clement fielded the sharp grounder and tossed it to Amed Rosario for the second out. Rosario was forced to double clutch on his throw to first when Owen Miller was late getting to the bag.

Brandon Belt scored on the fielder’s choice when the Guardians failed to turn the double play. Austin Slater scored on a wild pitch by losing pitcher Nick Sandlin (0-1, 8.31 ERA), leaving the score 4-2.

Reliever Dominic Leone (1-0, 2.70) earned the win with a scoreless seventh inning. The former Guardians pitcher was the fourth of six relievers used by manager Gabe Kapler. Jake McGee earned his first save.

Myles Straw had a hand in both Cleveland runs. His double off the top of the wall in left field drove in Owen Miller, who led off the fifth inning with his major-league leading seventh double. It knotted the score at 2-2.

Right-hander Cal Quantrill pitched 4 1/3 innings of no-hit ball before Thairo Estrada singled to left field. Steven Duggar followed with a double high off the wall in left field. When Quantrill walked Mike Yastrzemski to load the bases, he was sent to the showers after 91 pitches.

Reliever Logan Allen didn’t exactly close the door on the rally. He allowed a two-run single to Brandon Belt, which handed the Giants a 2-1 lead.

The Guardians took a 1-0 lead in the first inning when Straw tripled and came home on Jose Ramirez’s sacrifice fly. It was his major-league leading 15th RBI.

Quantrill’s five-game winning streak remains intact, as he earned a no-decision. It’s the longest streak by a Guardians’ starter since Mike Clevinger in 2019.