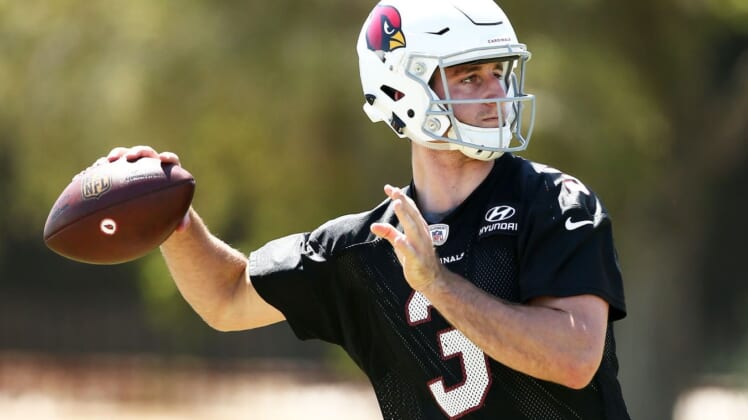 New York Giants head coach Pat Shurmur indicated on Tuesday that his team would like to add a franchise quarterback to eventually take over for Eli Manning.

Picking sixth and 17th overall in next month’s NFL Draft, most figured that the Giants were looking at the annual event as an avenue to add said quarterback.

Not so fast. According to Ralph Vacchiano of SNY, the Giants are having internal discussions about the possibility of trading for Arizona Cardinals quarterback Josh Rosen.

“The Giants are planning to investigate every possible option when it comes to finding their Quarterback of the Future, and that includes a potential trade for Arizona Cardinals quarterback Josh Rosen,” the Giants’ insider noted Thursday evening.

By now, it’s almost a foregone conclusion that the Cardinals will select reigning Heisman winner Kyler Murray with the No. 1 overall pick. First-year head coach Kliff Kingsbury did absolutely nothing to dispel these rumors on Tuesday.

If that were to happen, Arizona would then have to flip Rosen in a separate trade — less than a calendar year after selecting him in the top 10 of the 2018 NFL Draft.

From a Giants perspective, this could make a lot of sense. General manager David Gettleman and Co. likely wouldn’t be able to land either Murray or Ohio State’s Dwayne Haskins with the sixth selection.

Instead, the team would then have to move the 17th pick it acquired in the Odell Beckham Jr. trade in a trade-up scenario.

Rosen himself would come cheaper. Common logic suggests the Giants could potentially make a move for him that includes sending their second-round pick and change to Arizona.

It’s certainly something to keep an eye on over the next couple weeks.