Giants could reportedly listen to offers for Madison Bumgarner this summer 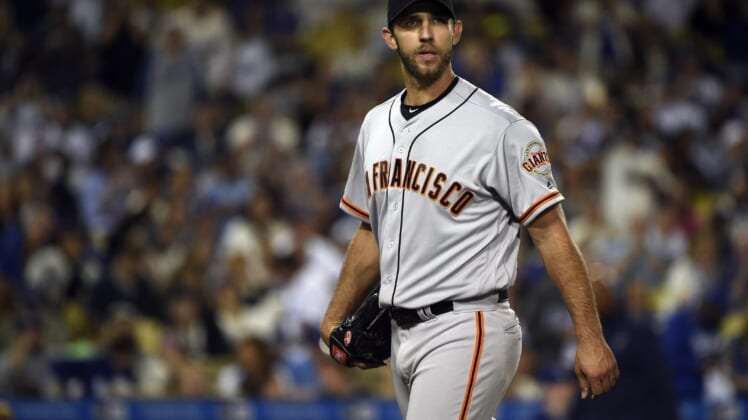 The San Francisco Giants entered Thursday’s action with a 24-26 record and just two games out of first place in what has been a mediocre National League West.

This is a tad surprising given that San Francisco was among the worst teams in baseball last season and have been without ace pitcher Madison Bumgarner (broken hand) for the first two months of the season.

Should San Francisco fall out of contention between now and July’s trade deadline, it’s possible the team will be sellers. According to MLB.com’s Bryan Hoch, that would include listening to offers for the 28-year-old former World Series hero.

“If the Giants are scuffling into July, they’ll likely listen to offers for Bumgarner, who should be completely back from his broken left hand by then,” Hoch reported. “Again, San Francisco would need to get a huge return for its biggest arm since Juan Marichal — think three or four prospects out of the Yankees’ Top 30 — but in this case, it could be worth it.”

In this specific report, the MLB insider was answering questions about New York Yankees potentially making a push for Bumgarner. At 31-15 on the season, New York is one of MLB’s top World Series contenders. Adding a player of Bumgarner’s ilk would be huge for said aspirations.

Bumgarner’s current contract comes with a $12 million team option for the 2019 season. That would make him a highly sought-after figure should the four-time All-Star get healthy and the Giants ultimately do place him on the trade block.