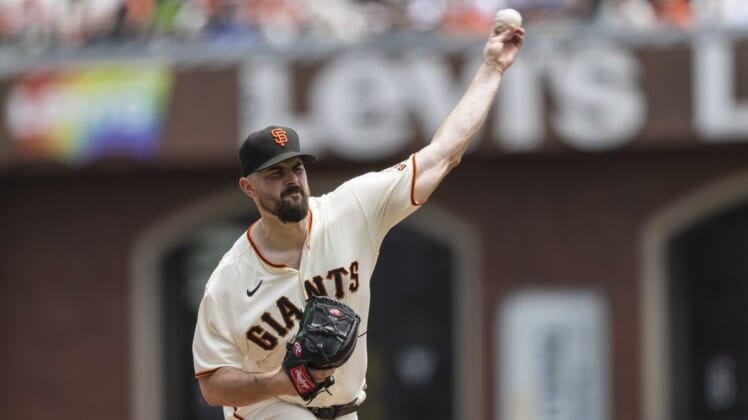 Austin Slater hit Julio Urias’ fourth pitch for a home run, Mike Yastrzemski followed with another homer one out later and San Francisco Giants completed a three-game home sweep over the Los Angeles Dodgers with a 2-0 victory Sunday afternoon.

Left-hander Carlos Rodon (5-4) combined with three relievers on a five-hitter, helping the third-place Giants trim three off what had been a 6 1/2-game deficit behind the National League West-leading Dodgers at the start of the series.

The homers by Slater, his third of the season, and Yastrzemski, his sixth, provided all the scoring in the game as the Giants completed their first three-game home sweep of their Southern California rival since the final three games of the 2016 regular season.

Urias (3-6), who beat Rodon in a 3-1 Dodgers’ home win in May, went six innings, allowing no runs and only one hit after the first three batters of the game. He struck out 10 and did not issue a walk.

Winless in his last five starts, Rodon was pulled after six shutout innings, having given up two hits and three walks. He struck out eight in a 98-pitch outing.

Both hits off Rodon were leadoff doubles, one by Will Smith in the second and the other by Chris Taylor in the fifth. Taylor reached third with two outs, before Rodon got Mookie Betts to pop out to shortstop with two aboard.

John Brebbia, Dominic Leone and Jake McGee completed the shutout, San Francisco’s first of the season, allowing three hits over the final three innings. McGee worked a nine-pitch ninth for his third save.

Yastrzemski also doubled to complete a two-hit game for Giants, who had opened a nine-game homestand with two losses in three games against the Colorado Rockies.

San Francisco finished with just five hits, four of which went for extra bases. Darin Ruf had a double.

Taylor had two doubles for the Dodgers, who like the Giants, had more extra-bases hits (three) than singles (two).

The loss was Los Angeles’ ninth in its last 13 games.