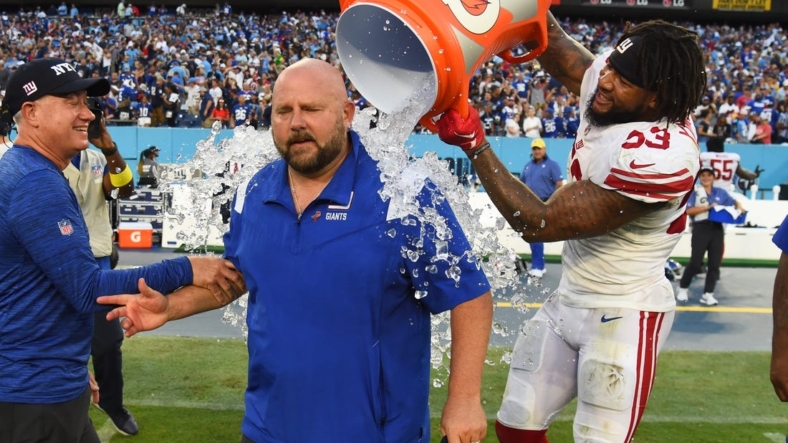 Brian Daboll tasted victory in his head-coaching debut with the New York Giants Sunday, thanks in large part to his decision to go for a two-point conversion with 1:06 left in regulation.

Daboll reiterated at his press conference Monday that he would have lived with the decision if the Giants failed to convert it, and the same would be true had the opposing Tennessee Titans converted their last-second field goal attempt to steal the win.

“Certainly, you want to try to go out there and give yourself a chance to win,” Daboll said. “But the decision to go for two with a loss, I would feel the same way about it today as I did yesterday. The guys fought it out; they did a great job. And it’s a decision we felt right at that particular time. I still feel it was the right thing to do.”

After Daniel Jones hooked up with Chris Myarick for a touchdown to bring New York within 20-19, Daboll called for the two-point try, in which Jones hit running back Saquon Barkley with a completion to create the 21-20 final score.

Daboll, who said Sunday that he’d consulted some players on the sideline about his desire to go for two, added Monday that his team’s analysts also had their say.

“I think analytics always plays a role in key decision-making,” Daboll said. “I know what we do is we talk about that during the week, myself and Ty (Director of Football Operations & Innovation Ty Siam) and Cade (Offensive Assistant/Game Manager Cade Knox), two of the guys that run that department on gameday with myself. And we go through tons of different situations.

“But you certainly take into factor the three timeouts; we would probably have had an onside kick if we didn’t get it, bring the three timeouts and then have a really long field. But those are conversations that are happening during timeouts or in between series. But I lean heavily on those guys. One of them went to Cornell; another one went to Harvard, so they’re pretty good guys to have.”

It all added up to the Giants’ first Week 1 victory since the 2016 season.

After the game, cameras captured Daboll dancing in the middle of a large circle of his players in the locker room.

“It was a Biggie song, and it was a good win,” Daboll said. “These guys worked hard. They were dancing before I got in there. So, I don’t know if I was really dancing very much if you want to call it that. But it’s good to celebrate with your guys. They put a lot of work (in).”