In a negative escalation to what was a positive, and surprising, historic moment in MLB history on Tuesday, San Francisco Giants’ first base coach Antoan Richardson has accused San Diego Padres’ third base coach Mike Shildt of racism.

MLB history was made last night in San Francisco when Richardson was shockingly ejected during the third inning of the Giants’ 13-2 win over the Padres. The coach being removed from the game was certainly a story, but it was overshadowed when Alyssa Nakken replaced him at first base and became the first woman ever to coach an MLB game on the field.

However, after the game details of what led to Nakken’s moment were revealed to Bay area reporters. In a post-game interview, Richardson — who is black — explained that an exchange of words between himself and Shildt led to his eventual ejection. He also alleged that comments made by the San Diego 3B coach had undertones of racism.

“I say this because his words were disproportionately unwarranted and reeked undertones of racism when he referred to me as ‘that mother—er,’ as if I was to be controlled or a piece of property or enslaved,” he continued. “I think it’s just really important we understand what happened tonight.”

Richardson claims he was told by the umpire he was removed from the game for “instigating.” To which the Giants coach feels sends a terrible message for how Shildt — who is white — might conduct himself on the field in the future.

“And the second part that’s equally disappointing is that me being tossed by that umpire empowers this coach to continue to have conversations like that with people like me, and that’s really unfortunate that’s what happened tonight,” Richardson added.

Shildt and Padres manager Bob Melvin did not comment on the matter following the game. However, Giants manager Gabe Kapler was supportive of his coach and insisted after the game he trusted that Richardson’s reaction to the exchange was likely warranted. 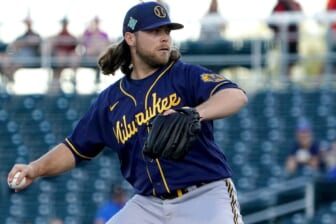 On the MLB games today schedule the Giants return to face the Padres at 3:45 PM ET.