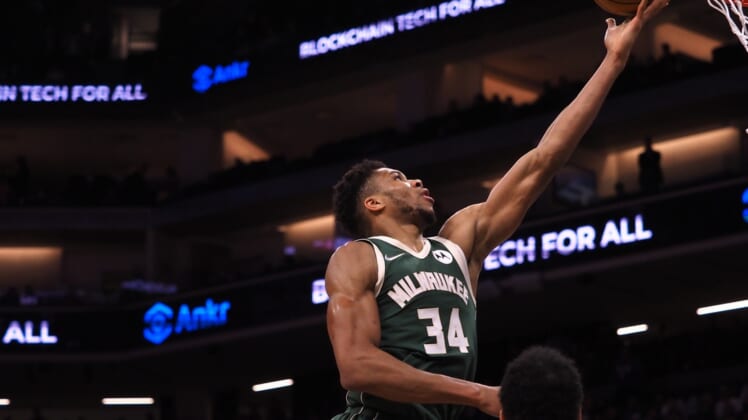 The Milwaukee Bucks, back from a mediocre road trip, will look to build upon their home success when they face the Chicago Bulls on Tuesday night.

Milwaukee has won its past four home games, against three Eastern Conference opponents and the league-leading Phoenix Suns. The Bucks just closed a four-game trek in which they went 2-2 after falling 138-119 to the Minnesota Timberwolves on Saturday night.

Giannis Antetokounmpo missed the latest game due to knee soreness, and he is listed as probable for Tuesday.

In Antetokounmpo’s absence on Saturday, Khris Middleton put up 15 points on 6-of-13 shooting and added seven rebounds and five assists for Milwaukee. Brook Lopez and reserve Pat Connaughton also had 15 points apiece, and Jrue Holiday chipped in 14 along with seven assists.

Third quarters have been the Bucks’ kryptonite all season, and Saturday was no different. Milwaukee surrendered 38 points in the frame and found itself down by 24 entering the fourth.

The Bucks also struggled with their ball-handling, recording 14 turnovers that led to 21 points for the Timberwolves.

“We got to be stronger with the ball, take care of it better,” Milwaukee coach Mike Budenholzer said. “(The Timberwolves are) good. They’ve got a good thing going right now, they’re in a good rhythm. But the turnovers were a big part (for) them, kind of allowing them to get separation from us.”

Though Antetokounmpo likely will be back to face Chicago, Milwaukee will be without Middleton, who will be held out because of a wrist injury.

The Bucks’ Lindell Wigginton is also expected to miss the contest with an ankle injury.

The Bulls hope they are back on track after they snapped a three-game losing streak with a 113-99 victory over the visiting Toronto Raptors on Monday night. The result allowed Chicago to clinch a winning season for the first time since the 2015-16 campaign.

Chicago’s Zach LaVine amassed 26 points, six rebounds and six assists against Toronto, with his 16 third-quarter points proving crucial at the game’s key juncture. DeMar DeRozan also had 26 points on 11-of-14 shooting, and Nikola Vucevic chipped in 19 points to go along with 13 rebounds.

Bulls forward Patrick Williams made his long-awaited return, having recovered from wrist surgery. The second-year man, who had not played since Oct. 28, logged seven points and two rebounds in 19 minutes off the bench.

“It’s been a minute, it’s been a minute, but I’m super excited, more excited just to battle with the guys,” Williams said. “We got a great group of guys, they’ve been supportive of me through the whole process.”

Tuesday’s contest marks the start a five-game road trip for Chicago, which has struggled away from home of late. The Bulls have dropped six of their past seven on the road, with their only away win in that stretch coming against the Detroit Pistons on March 9.

The Bulls are also seeking their first win against the Bucks this season after falling 94-90 in Milwaukee on Jan. 21 and 118-112 in Chicago on March 4. Antetokounmpo averaged 32 points and 14 rebounds in those games.