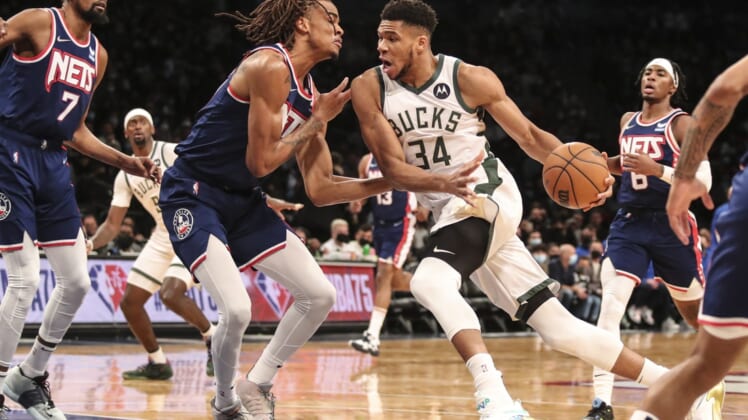 Giannis Antetokounmpo had 31 points, nine assists and seven rebounds as the Milwaukee Bucks cruised to a wire-to-wire 121-109 victory over the slumping Brooklyn Nets Friday night in New York.

Antetokounmpo returned from missing Wednesday’s loss to Toronto due to an illness and helped Milwaukee win for the seventh time in nine games. He shot 11 of 17 and needed 27 minutes for his fourth 30-point game in six games since returning from the health and safety protocol on Christmas.

Bobby Portis helped Milwaukee establish the tone for its dominating showing by adding 20 of his 25 points in the first half. Khris Middleton contributed 15 of his 20 in the third quarter when the Bucks opened a 24-point lead.

The Bucks shot 45.8 percent, hit 16 3-pointers and cruised to the win without Jrue Holiday, George Hill, Pat Connaughton, Grayson Allen and coach Mike Budenholzer, who are in the protocol.

Antetokounmpo and Portis each scored 10 points in the first quarter to help the Bucks open a 29-21 lead. Antetokounmpo sat for the final 9:24 of the second quarter after getting his third foul and Milwaukee held a 60-49 lead at halftime.