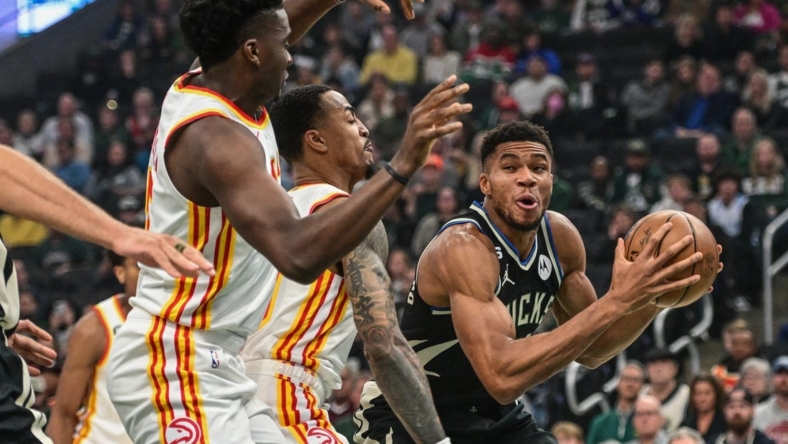 Jrue Holiday and Giannis Antetokounmpo both scored 34 points and the Milwaukee Bucks remained the NBA’s only unbeaten team with a 123-115 win over the visiting Atlanta Hawks on Saturday.

Holiday, who entered the game averaging 14 points, made a driving layup with 23.2 seconds left to give the Bucks a three-point advantage and added a free throw with 21.2 seconds to extend the lead to four. Antetokounmpo added two free throws and a dunk in the final 16.1 seconds and the Bucks improved to 5-0.

Brook Lopez added 21 points, 19 of which came in the first half, and reserve Jordan Nwora scored 11.

Atlanta was able to hang in the game thanks to Trae Young, who scored a season-high 42 points on 15-for-32 shooting. It was the 100th time in his career and the third straight night that Young has scored 30-plus points.

The Hawks trailed by as many as 12 in the second half but took a 107-106 lead on a 3-pointer by Young with 4:09 left. Antetokounmpo answered with a dunk and the Bucks never trailed again.

Atlanta led by seven early, but the Bucks stormed back behind a barrage of 3-pointers and led 32-30 at the end of the first quarter. Young played the entire first quarter and scored 17.

Lopez made his first five 3-pointers and helped the Bucks take a 59-51 lead. The Bucks were 9-for-19 on treys at halftime.

Atlanta got as close as four points in the third quarter when Young hit a 3-pointer to make it 80-76, but Holiday scored 14 and Antetokounmpo had 13 in the frame to keep the Hawks at bay. Milwaukee led 91-84 going into the final quarter.