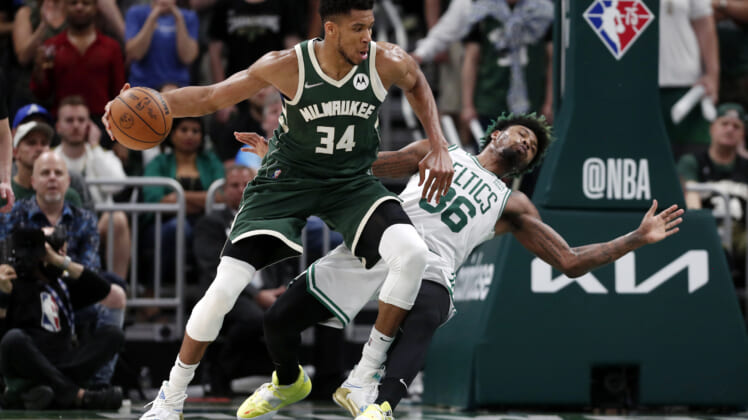 Any time a star NBA player chooses to participate in basketball activities outside of official league play, there are serious risks involved. Yet, when you’re Giannis Antetokounmpo, you kind of are the team. Basically, what the Greek Freak wants, he gets.

In this case, he wanted to participate with his three brothers representing Greece in the EuroBasket. Hard to blame a guy for wanting to spend time with family, no matter the situation.

Unfortunately that decision to play in the EuroBasket may come back to bite Antetokounmpo and the Milwaukee Bucks.

According to Harris Stavrou, Antetokounmpo suffered a back injury, and the MRI results are already in. Luckily it appears as though he escaped a major injury, as the results showed “no acute damage” to his back. For now, he will rehab his back and look to resume play with his team as soon as he physically can.

But it’s still not anything the Bucks want to hear as they hope to embark on a season that challenges the Golden State Warriors and everyone else vying to add another Larry O’Brien Trophy to their collection at the end of the year.

Imagine being a superstar like Giannis Antetokounmpo. Sure, it comes with millions of perks, but when he’s a massive celebrity worldwide, it also comes with plenty of red flags.

By him playing in EuroBasket competition, he’s going up against players he typically would never face in the NBA. But that doesn’t mean the intensity, effort, or competition levels are drastically diminished.

Sure, many of these players will never even come close to stepping foot on an NBA floor, but that’s not what we’re getting at.

When players get a chance to take on a legend such as Antetokounmpo, they bring their absolute best on every possession. Though they may not get to match up with NBA talent on a daily basis, maybe someday they’ll get to tell the story of the one brief moment they got the best of one of basketball’s greatest.

That means Antetokounmpo is likely facing intense battles in the paint, and maybe that leads to some extracurricular activity after the whistle here and there. Either way, it appears he’s not in danger of missing a large amount of time, and for that, we’re thankful.