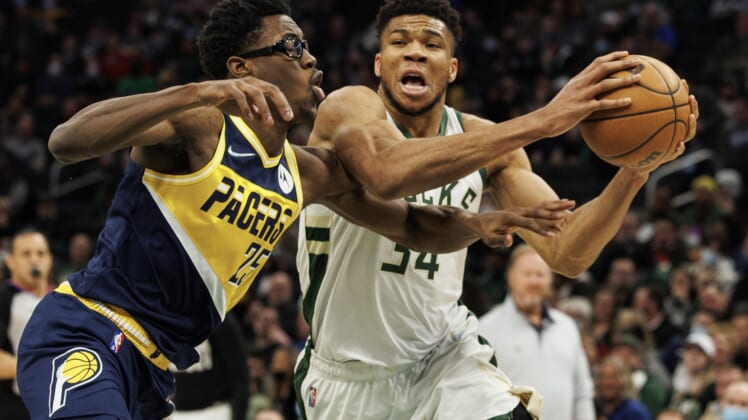 Giannis Antetokounmpo scored a season-high 50 points as the Milwaukee Bucks earned a 128-119 win over the visiting Indiana Pacers on Tuesday night to complete a four-game sweep of the season series.

Milwaukee shot over 50 percent from the field for the fifth time in the last seven games, cashing in on 48 of its 86 shots (55.8 percent).

In what was a back and forth third quarter, the Pacers pulled within one after Haliburton hit a 3-pointer with 55 seconds left in the frame, but Indiana could never take a lead. The Bucks went on to outscore the Pacers 29-24 in the fourth, handing them their seventh consecutive loss.

A 15-7 run in the second quarter put the Pacers up by two, but Milwaukee outscored Indiana 23-15 for the remainder of the half to go into the break with a six-point edge. Antetokounmpo led all scorers with 18 points to go along with nine rebounds, and Middleton had 11 points.

The Bucks were extremely efficient through the first 24 minutes of action, hitting 28 of 46 shots (60.9 percent).

Indiana’s new duo of Hield and Haliburton kept it within striking distance, as they combined for 27 points on 10-for-15 shooting. The Pacers were also aggressive on the defensive end, nabbing six steals that helped translate to nine fastbreak points.

Milwaukee jumped out to an early seven-point lead thanks to 12 points from Antetokounmpo and a 56.5 percent shooting performance from the field in the first quarter. Eighteen of its first 34 points came inside the paint.